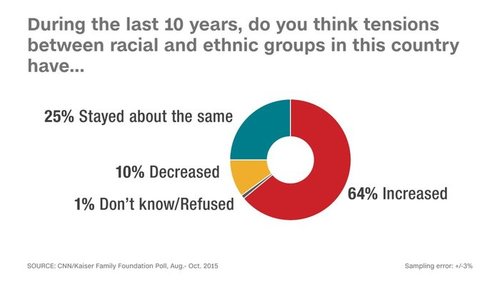 Sailer Quoted On CNN: "Who Will You Blame Once Obama's Gone?"

Who will you blame once Obama’s gone?

… Consider the question of whether racial strife is now the norm.

“I don’t see that stopping when Obama is no longer president,” says Steve Sailer, who writes for Unz Review and Taki’s Magazine, both started by alumni of The American Conservative. “I can imagine a white president like Hillary [Clinton] upping the ante because she doesn’t have the benefit of being black.”

Sailer says Clinton will need to talk more about racial grievances to attract minority voters because she can’t count on the strong black support that Obama enjoyed.

Democrats, he says, have decided to build a coalition of “fringe” groups by demonizing people who “have rightful reasons for representing the core of Middle America.”

That decision, however, is sparking a white backlash, Sailer warns. More whites are starting to see the need to unite like other ethnic groups.

A modest degree of racial tension is pretty much inevitable, since you are talking about different people with different interests and different sets of relatives. Obama cynically relaunching the Battle of the Sexes during his re-election campaign, however, is more culpable since men and women have the same relatives on average. And it’s not as if Obama has any personal belief in the dogmas of feminism whatsoever.