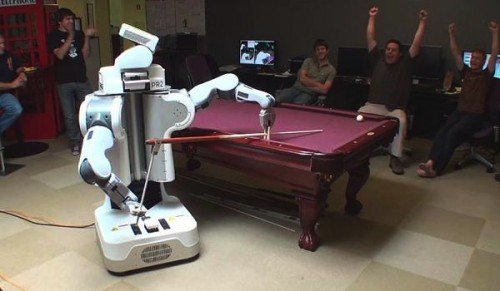 One of the toughest skills for automation engineers to crack is the amazing human hand with its unique dexterity — but it’s not for lack of trying.

Amazon’s highly automated warehouses have thousands of Kiva robots moving racks of merchandise around to human box packers — for now. The company is working to develop a machine that can discern, grasp and pack objects through its yearly Amazon Picking Challenge, a contest for robot designers to create the the next major step in human worker replacement.

Meanwhile, sewing presents a similar problem because clothing construction is almost completely based on manual dexterity, where the process requires handling fabrics that can vary tremendously in terms of stability, stretch, slipperiness, thickness and other qualities.

But now the brainiac engineers say they are getting close to a workable SewBot.

Add sewing to the growing list of jobs that won’t need imported immigrant workers to perform because smart machines will fill them in the future. As the following article points out, “in coming decades the gains [in automation] could add up to a significant reduction in the need for human workers in many fields.”

Another quote that should be getting attention: “By 2030, 90% of jobs as we know them today will be replaced by smart machines,” according to a 2013 report from a Gartner tech analyst.

Why isn’t automation being discussed by any of the gaggle of Presidential candidates? The workplace is being fundamentally transformed, while Washington acts as if nothing has changed and the jobless recovery is an unexplainable curiosity.

Automation gains could reduce need for human workers in many fields

SoftWear Automation Inc., the startup that employs the engineers, promises to transform the apparel industry, automating production so goods can be made in factories anywhere by robots and small teams of people tending them.

So far, the robots can do only basic tasks, like sewing around button holes or the edges of fluffy bath rugs. They can’t do other things people are good at, such as holding together two floppy pieces of material while sewing them into a shirt. SoftWear’s SewBots can’t produce a finished garment, though the firm hopes to reach that stage next year.

The garment industry is interested in the technology, but “people are going to start small with us,” says K.P. Reddy, SoftWear’s CEO. “It’s going to be incremental.”

The same can be said for many potential applications of robots, 3-D printers and other forms of automation, ranging from the assembly of myriad consumer goods to caring for the elderly. Though progress has been incremental so far, in coming decades the gains could add up to a significant reduction in the need for human workers in many fields.

“By 2030, 90% of jobs as we know them today will be replaced by smart machines,” three analysts from the research firm Gartner Inc. wrote in a 2013 report. They defined smart machines as ones doing things previously thought doable only by people, such as learning from experience. Machines, they said, “are evolving from automating basic tasks to becoming advanced self-learning systems mimicking the human brain.”

By 2050, such machines are likely to “do every job that we presently do,” says Vivek Wadhwa, a fellow at Stanford University and frequent writer on technological trends. “The more I look forward, the more convinced I am that jobs won’t be about sustenance any more. Since everything will be so cheap, our jobs will be about knowledge and the arts. This is what will keep us busy.”

The most common tasks for industrial robots today include heavy lifting, welding and applying glue, paint and other coatings. Robots can lift heavier weights than people and are far more precise. Unlike people, they can be relied on to do exactly what they are told. They also can work around the clock.

To demonstrate robots’ shortcomings, Rodney Brooks, chairman of Rethink Robotics Inc. and a former professor at the Massachusetts Institute of Technology, thrusts a hand into his front pocket and pulls out his keys. That task requires far more dexterity than today’s robots can muster.

“Our hands are exquisite mechanisms,” Dr. Brooks said. “We’re at least a decade, perhaps two decades, from having robots with dexterity” anywhere near human levels.

Given the technological limitations, an increasingly popular approach is to make collaborative robots that work alongside people. The robots do the parts of a task requiring strength and precision, while people supply finesse in fitting things together and common sense in solving unforeseen problems.

Robots are becoming smaller and lighter, so they can be moved from one task to another. They also are becoming easier to program as developers come up with intuitive methods for teaching them new tasks.

The global boom in such products as smartphones and electronic-game consoles has reduced the cost of robot parts such as sensors, cameras and chips capable of processing vast amounts of information, says Larry Sweet, a robotics professor at the Georgia Institute of Technology. He adds that advances in voice recognition, of the sort used by the Siri app on Apple Inc.’s iPhones, mean people eventually will be able to tell robots what to do rather than pushing buttons.

Robots also have the potential to learn on their own. Rather than merely following coded instructions written by people, they will increasingly teach themselves skills by looking on the Internet for cues on how particular problems have been solved before, Gill Pratt,a former program manager at the U.S. Defense Advanced Research Projects Agency, wrote recently. If a robot remains stumped after such a search, it might seek help from a human.

Japan’s Fanuc Corp. already sells what it calls a “learning robot,” capable of using trial and error to determine the most effective way to complete a series of welding tasks.

Robots aren’t the whole story, of course. Advances in 3-D printing should allow more products to be made with less human toil. Meanwhile, the convergence of big data and powerful mobile computing means that various devices can help people learn skills and do work more efficiently, so fewer humans are needed.

Mahadev Satyanarayanan, a computer science professor at Carnegie Mellon University in Pittsburgh, is working with colleagues on what he calls “wearable cognitive assistance.” He believes workers eventually will be able to wear Google glasses or similar devices that will be like “an angel sitting on your shoulder and whispering helpful hints.” The angel might tell a trainee short-order cook that an omelet is about to burn, he says, or help a newbie factory worker fix a machine.

In Atlanta, SoftWear is taking on one of the trickiest automation challenges. The garment industry has long been a laggard in automation investments, partly because profit margins are low and plenty of cheap labor was available. Now garment makers may be more inclined to invest as the supply of cheap labor shrinks and retailers increasingly want quick shipments that don’t need to cross an ocean.

One problem is that robots typically deal with rigid materials, such as metals or plastics. Cloth is harder to handle because it puckers or otherwise changes shape when moved. People manage that through touch and feel, smoothing cloth as they feed it into a sewing machine.

SoftWear’s robots use cameras to tell where the cloth is and arms with vacuums to move it where it needs to be. The company, begun as a research project at Georgia Tech, has so far delivered just two machines, to a large home-textiles company it won’t identify. But Mr. Reddy, the CEO, said he expects to ship 75 to 100 robots next year.