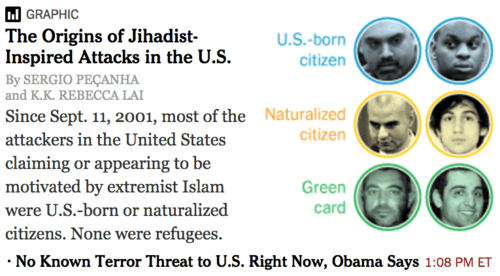 Dept. of Not as Reassuring as the NYT Assumes: Islamic Terrorists "Born In This Country Or Were Naturalized Citizens", Not Refugees

Ever since the Paris Massacres, the establishment has mounted a campaign to convince Americans who follow the news that our memories of terrorist incidents are all wrong. One ploy is to emphasize a technical distinction between refugee and asylee. But the funnier one is their assurance that: “You don’t have to worry about this new generation of Muslims; if history is any guide, it’s their sons who will be much more likely to try to kill us!”‘

Evidently, the Magic of Assimilation doesn’t work as well as promised in other contexts …

Instead of looking at this graph skeptically, we are suppose to swell up with patriotic pride that Joker Tsarnaev deigned to become a naturalized citizen. U-S-A! U-S-A!

By the way, I see that Tamerlan Tsarnaev (lower right corner) had a Green Card to permit him to get a job in the U.S. But did he ever have a job? Aspiring MMA fighter, weed dealer, and sponger off your American wife’s affluent family aren’t official jobs, are they?

One root of this mental blindness is that the establishment sees the Terrorism Issue and the Immigration Issue as wholly separate categories.

But voters are starting to grasp the connection. Thus the latest Reuters poll has Trump in first at 38.0% followed by the cunning Cruz, who has positioned himself to not get into much conflict with Trump over immigration, in second at 11.6%.