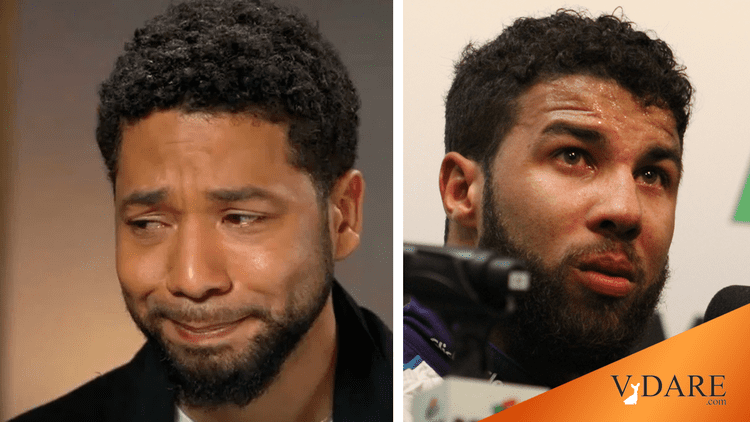 The years of antiwhite hate hysteria over nooses supposedly being planted by white racists to terrorize blacks will eventually induce some white guy to actually do it. But, judging by what we know so far about the latest brouhaha—over a purported noose found in the garage of Bubba Wallace, the half-black NASCAR race driver—Noose News seems to remain Fake Noose.

I first wrote about Wallace in 2013 in my Taki’s column “Nature, Nurture, and NASCAR,” when he was only 19, but already was being hyped as NASCAR’s Great Black Hope, the Tiger Woods of stock car racing.

Since I wrote this column, the FBI announced that its crack 15 man team of top men has determined it wasn’t a hate crime, just the stupid garage door pull rope loop, as crowdsourcing conservatives on the Internet had figured out on Monday. From AL.com:

A rope found in the garage stall of Black driver Bubba Wallace at the NASCAR race Sunday was a garage door pull, not a noose, and had been there since 2019, federal authorities and NASCAR said Tuesday.

Northern District of Alabama U.S. Attorney Jay Town on Monday announced his office had launched an investigation along with the FBI and the Department of Justice Civil Rights Division. Town said they were looking to see whether there are violations of federal law. No federal crime was committed, his office said.

Town and FBI Special Agent in Charge Johnnie Sharp Jr. on Tuesday released this statement about the probe: “On Monday, fifteen FBI special agents conducted numerous interviews regarding the situation at Talladega Superspeedway. After a thorough review of the facts and evidence surrounding this event, we have concluded that no federal crime was committed.

The discovery of the rope, announced by NASCAR Sunday night, came less than two weeks after Wallace successfully pushed the stock car racing series to ban the Confederate flag at its tracks and facilities.

How big a contract did Colin Kaepernick get from Nike to sit around and be oppressed by the white man?

If you check in with iSteve constantly (which you should), you may have noticed Monday evening that I put up briefly an iSteve post on Bubba Wallace pointing to some early research casting doubts on his story. But late on Monday evening, The Last Refuge’s new findings came together conclusively proving that the pull loop that had been photographed last fall was no longer there this weekend.

6) And finally here's the side-by-side that shows the manual garage door pull hand loop in place [Nov '19] and the hand loop (purposefully identified as a "noose") missing or cut-off [June 22, 2020]

I don’t like being wrong, especially for a column that will be up for a week, so I was initially cautious, relegating their investigation to a blog post. But when The Last Refuge proved their case, I took down the post and switched the subject of my column. Unfortunately, I had to take down about 20 of your comments, but I will paste them back in the comments on this post.

By the way, here’s my popular February 2019 column “Fake Noose!” about Jussie Smollett and why noose news is virtually always fake noose.

Also, here is my 2013 column about the then 19-year-old Bubba Wallace: “Nature, Nurture, and NASCAR.”

From the New York Times, here’s the admission:

(Reuters) – An FBI investigation into a noose found hanging in Bubba Wallace’s garage prior to a NASCAR Cup race concluded a federal crime was not committed, the U.S. attorney’s office for the Northern District of Alabama said on Tuesday.

The investigation determined that the noose found in Wallace’s stall at the Talladega Superspeedway on Sunday may have been in that garage as early as October 2019.

(Reporting by Steve Keating in Toronto; Editing by Leslie Adler)

Two sentences plus a headline and they made three errors: The loop in the rope used to pull the garage door down wasn’t a noose. A noose knot tightens, but this was a fixed loop so it wouldn’t hurt your hand.