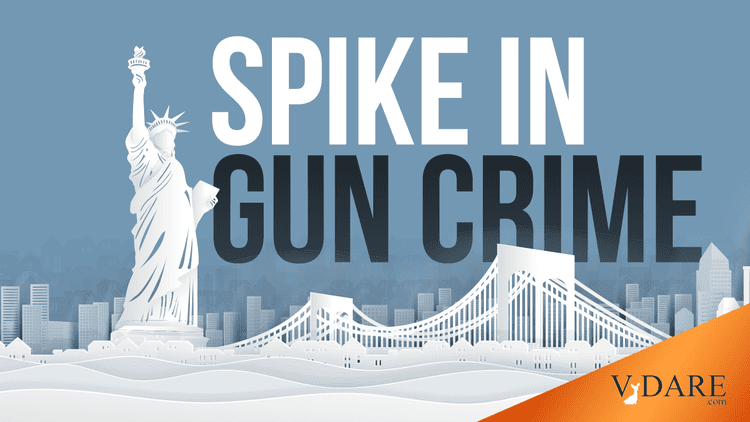 Shootings Up Sharply in New York

It has been nearly a quarter century since New York City experienced as much gun violence in the month of June as it has seen this year.

The city logged 125 shootings in the first three weeks of the month, more than double the number recorded over the same period last year, police data show. …

Yet, New York City is still quite safe compared to more typical big cities like Chicago, that New York’ 125 shootings in the first 3 weeks of June is barely higher than the 110 shot (at last count) in Chicago over the weekend. Heck, Chicago had 41 more shootings on Monday.

“You have to go back to 1996 to have a worse start of June,” Michael LiPetri, the chief of crime control strategies, said in an interview on Monday.

The rising toll of gun violence has become part of a contentious debate over the future of policing in the wake of mass protests against police brutality. Police unions and their supporters have issued shrill warnings that the city was slipping into a high-crime era reminiscent of the early 1990s.

The city is not alone. Shootings are on the rise in other big cities across the country, including Chicago and Minneapolis, a trend that some conservatives have seized on to argue against the recent demands of protesters to cut police budgets and rein in officers.

It’s almost as if Black Lives Matter’s local political victories tend to lead to a lot of Black Lives Splattered by other blacks.

… Other cities are seeing similar violence: In Chicago, more than 100 people were shot over the weekend, the most in a single weekend since 2012, and 14 died. That carnage came just weeks after 24 people were killed among 85 people shot over the Memorial Day weekend.

No, that was the next weekend in Chicago. George Floyd was killed on Memorial Day, so his grieving mourners didn’t start shooting each other en mass until later.

In Minneapolis, police said that 111 people have been shot in the four weeks since the death of George Floyd, a black man who was killed in police custody, sparked nationwide protests.

Nationally, homicide rates were already rising in 64 large American cities for the first three months of 2020 over the previous three years, but on average the pandemic caused them to stall briefly, before ticking up again in May, said Richard Rosenfeld, a criminologist at the University of Missouri-St. Louis. Rosenfeld is also a co-author of a study about homicide rates during the pandemic to be released Thursday by Arnold Ventures, a philanthropy focused on criminal justice and other issues.

In New York, there were 166 murders through June 21, up from 134 over the same period last year, the police said.

Some of that increase can be attributed to both the strain of the pandemic and the recent unrest, although the primary reason cited by criminologists was the advent of summer — traditionally a high-crime season because people are outside for longer and tempers flare in the heat.

As you’ll recall, in 2019 summer was called off, so murders didn’t increase.

In New York, the police have linked the rise in gun violence to a bail law enacted this year, which limited judges’ ability to keep people in jail before trial if they had been arrested on certain charges, as well as the release of thousands of people from jail and prison to help curb coronavirus. Chief LiPetri said 17 percent of shootings involved people on probation or parole.

Even veteran observers of the city’s crime trends viewed the jump in New York City as remarkable.

“I have been studying this for a long time. I have never seen that much of an increase ever,” said Christopher Herrmann, a professor at the John Jay College of Criminal Justice who once analyzed crime statistics for the New York City Police Department.

Mr. Hermann said the spike in shootings likely stemmed from a “combination of warmer weather, Covid cabin fever and the traditional gun violence that we see in June, July and August.”

Some criminologists said there is a precedent for crime rising after unrest over police killings.

Homicides rose nationally in the aftermath of the unrest ignited by the 2014 killing of Michael Brown in Ferguson, Mo. It went up 15 to 20 percent in the largest cities before subsiding again after two years, Mr. Rosenfeld said.

Nationally, murders went up 22.9% during Obama’s last two years in office, following Ferguson and the birth of Black Lives Matter in August 2014. It’s not that hard to remember the right number.