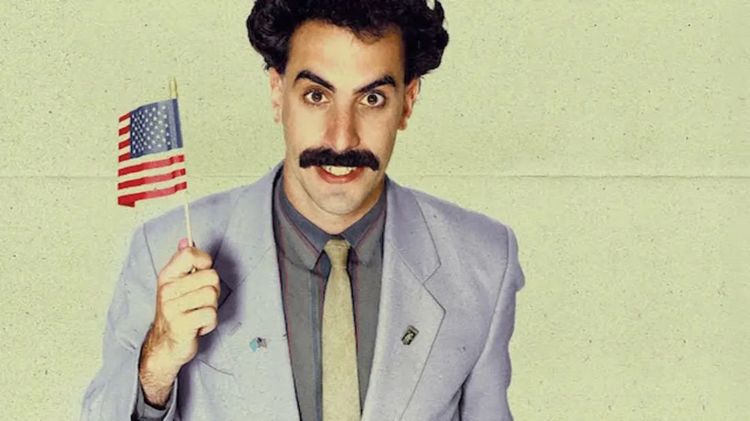 Sacha Baron Cohen Demands Censorship of Hate, Doesn't Get His Own Joke

Thank you, @ADL, for your International Leadership Award. My message: if we want to stop hate, we have to regulate Facebook and social media - the greatest propaganda machine in history. My full speech here: https://t.co/WD23rHVLMY

Of course, if you want hatred and demonization of Austrians and gays (Bruno), Slavs (Borat), Pakistani wiggers (Ali G), or anti-Israel Muslim dictators and pro-Palestinian feminists (The Dictator), watch my movies!

Seriously, as I wrote in 2012 in Taki’s Magazine in a review of The Dictator:

Ever since Republican-allied Bibi Netanyahu‘s 2009 election in Israel, America’s liberal press — presumably out of fear it might threaten Barack Hussein Obama’s reelection — has been warning that “Islamophobia” is an evil comparable to homophobia.

Yet Baron Cohen, whose grandmother lives in Israel, appears not to have gotten the memo. The Dictator indulges in almost every derogatory stereotype I’ve ever heard about Arabs and/or Muslims. And guess what? Stereotypes are funny, especially if motivated by an ethnic animus as deep-seated as Baron Cohen’s. The star, who speaks Hebrew, lovingly fondles all the throat-clearing sounds in Aladeen’s similarly Semitic Arabic.

Critics are finally starting to get the joke about Baron Cohen’s movies, or are at least getting worried that there is a joke. For instance, poor Andrew O’Hehir wonders in Salon, “What exactly is Sacha Baron Cohen up to?”

In the past, Baron Cohen’s satires have generated reams of excusatory explication about how the crude jokes are actually so meta that they’re really politically correct. But that gag is running a little thin with The Dictator, which is directed by Larry Charles (Larry David’s second fiddle on Seinfeld) and written by Baron Cohen, Alec Berg, David Mandel, and Jeff Schaffer none of whom, I’ll hazard to guess, are Arabs poking gentle fun at their own people’s foibles.

SBC’s Hollywood team has a lot of overlap in personnel with Larry David’s team. These guys are very funny and they are not very politically correct.

What’s the common denominator behind Baron Cohen’s four movies, Ali G Indahouse, Borat, Bruno, and now The Dictator? This conundrum has baffled the best minds in the film criticism business. Yet consider why Baron Cohen goes out of his way in The Dictator to ridicule a seemingly harmless Brooklyn grocery co-op. A little Googling dredges up the five-year-long battle within the Park Slope Food Coop over whether to ban Israeli products to protest oppression of the Palestinians.

Once you notice the pattern, the pieces fall into place: Baron Cohen never forgets. His four main characters have been animated by his weapons-grade animus against present or past foes of the Jews. At the pace he’s going, he might eventually get around to making a movie mocking the Amalekites, the Hebrews’ archetypal enemies since the Old Testament.

For example, Ali G, the “The Voice of the Yoof,” started out as an assimilated British Muslim chav (note Ali G’s references to his Uncle Jamal [who runs a curry restaurant]), but was retconned into Alistair Graham because WASPs are always fair game.

Why is Baron Cohen’s gay fashionista Bruno an Austrian? What has any Austrian ever done to the Jews?…oh.

How about Borat, who is supposed to be a Kazakh? Why would a Jewish man hate Kazakhs?…oh. “Kazakhs” equal (in Baron Cohen’s mind) “Cossacks,” as in the pogrom right before the intermission in Fiddler on the Roof. (At Cambridge University, Baron Cohen played Tevye.)

Baron Cohen doesn’t portray Borat as an exotic Central Asian; he plays him as one long Polack joke. In an essay in the Jewish Daily Forward about the roots of Baron Cohen’s comedy perceptively titled “Life Among the Goyim,” Andrew R. Heinze, author of Jews and the American Soul, notes:

In Borat, we see the recycling of one of the most basic stereotypes in the Jewish imagination: the viscerally antisemitic Slavic peasant.

Humor’s chief engine is hostility, and Jewish hostility has driven comedy forward for much of the last century. It’s OK to allow yourself to finally get the joke.