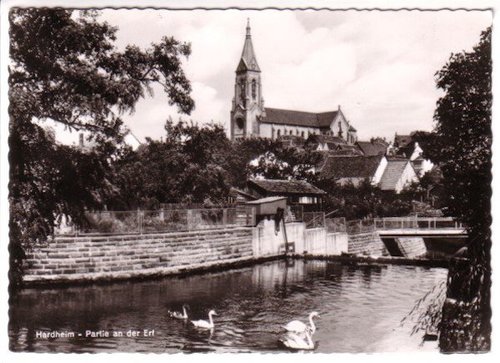 Culture clash alert! The small German community of Hardheim (population 6,856) made news by listing some suggestions for how newcomer Muslims are expected to act in a civilized European town.

Why would Mayor Volker Rohm and other local leaders think that making laws and cultural norms completely clear for diverse auslanders was necessary? Maybe townspeople have heard reports of crime and misbehavior on the illegal alien trail like rape and child abuse in refugee camps plus overall violence where the newbies are group-housed.

In addition, there’s the jihad threat lurking in the background whenever mobs of Muslims are allowed to congregate.

Perhaps the Hardheimers heard about the disturbing experiences of Aida Bolevar, an Arabic-speaking woman, in a Budapest train station:

I arrived in Budapest to meet my friends. When I got to Keleti Railway Station I was shocked at what I saw there. Masses of people of Arab appearance, filthy, unwashed and loud, who refused to let me get across the entrance. They shouted various insults in my direction, they tried to take away my luggage.

Since, like I said, I’m perfectly fluent in Arabic, I understood everything that they were saying. While I waited for my train, I saw what was happening in the station. People, without shame, simply defecated right where they stood, the women shouted, they were beaten by their own kind, not by the police who didn’t even touch them. . . .

Ninety percent of them were men between 18 and 45, completely healthy men who grabbed absolutely random children and fought their way forward using the children as a shield. Five people with tickets entered my train car. We sat down, the rest of the car was totally empty. Within minutes something unbelievable happened. Huge screaming, the windows were cracking, the situation was unbelievable. Like some dark cloud, a mass of people got on. There were conflicts, fights and other awful things. The situation’s climax was when they began talking to each other in a relaxed tone, considering whether or not they should rob us, since that would please Allah because we were infidels. As for me, it would really be worth raping me because I am not dressed like a proper woman.

My question: Do Arabs crap in public at home or only in infidel lands (assuming her description is accurate of course)?

What’s really odd is that, given the violent chaos following the refugee and alien horde entering Europe, the Express would call the Hardheim directives “bizarre” when it is exactly the sort of behavioral expectations one would present to a gaggle of barbarians.

THE mayor of a small town in Germany has drawn up a hilarious set of rules for refugees housed in his community which include leaving toilets clean and not pinching fruit from orchards.

Mayor Volker Rohm, 55, leaves no stone unturned, with his list also encouraging the new settlers in Hardheim, south Germany, to not open supermarket goods before paying for them, not to relieve themselves in public or to make a noise after 10.00pm at night.

Hardheim is now home to 1,000 refugees being housed in a former American military barracks. Officials in Berlin have questioned the necessity of instructing the new arrivals how to behave, but the town insists the guidelines will stay on the local community website.

Under the heading ‘helpful instructions and guidance,’ Mayor Rohm said young girls should avoid giving out their mobile phone numbers on Facebook and not feel forced into “marrying anyone.”

In other orders which seriously patronise the refugees, Mayor Rohm also said: “Welcome to Germany, welcome in Hardheim.

“Many of you have been through terrible experiences. War, threats to your lives, a dangerous escape over half the world.

“This is now over. You are now in Germany.

“Germany is a peaceful country.

“Now it is up to you for you not to remain a stranger in our country. A request to start with: that you learn the German language as quickly as possible so that we can understand one another and you can express your needs.

“In Germany people live side by side with many freedoms. There is freedom of religion for all.

“Women may lead a self-determined life and have the same rights as men. One treats women with respect.

“In Germany, one respects the property of others.

“No-one enters no private property, gardens, barns or other buildings and harvests no fruit or vegetables not belonging to them.

“Germany is a clean country and should remain so! Dispose of rubbish or waste in designated trash cans.

“When you are out you take the garbage to the nearest trash can and do not just throw it away.

“You pay for the goods in a supermarket in Germany before opening them.

“In Germany, water is used for cooking, washing, cleaning. Also, it is used here for the flushing of toilets.

“There are public restrooms that are accessible for everyone. Using such toilets, it is common to leave them clean after use.

“In Germany, the night’s rest shall apply from 22:00. After 22:00 one behaves accordingly not to disturb one’s fellow men.

“For cyclists there are also rules to keep them safe and not endanger others. Do not ride on pavements, do not ride three to a bike, repair punctures and do not use your feet to brake.

“Pedestrians use the pavements or, if none exist, walk in a line on the side of the road, not in the middle of the road and certainly not side by side.

“We perform our necessaries exclusively in toilets, not in gardens and parks, not hedges and behind bushes.”