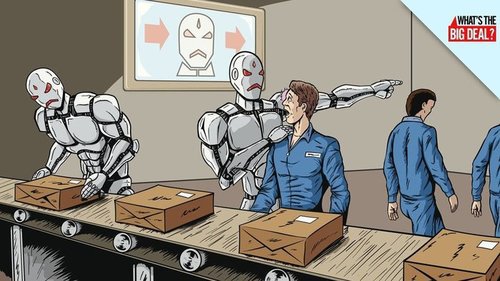 I generally don’t care much for the PBS Newshour’s liberal slant on nearly everything, but must admit they have done good work in examining the automation revolution in the workplace. They have reported important tech news, like one research firm’s forecast that smart machines will perform one-third of jobs by 2025 and have kept an eye on the issue of robots replacing humans.

One inquiring mind at PBS is economics reporter Paul Solman, who gets out and talks to people about financial issues as they play out in the real world. I thought his 2013 report about teen unemployment was first rate, in particular because he actually met with inner city kids and asked them how their job search was going. He also reported on the growth of automation in 2012, asking whether we should fear the end of work for humans.

On Thursday’s PBS Newshour, Solman did another economics walkabout, visiting a Stanford golf course where he observed a robot caddy and then moving to the campus proper, where a Stanford local delivery robot moved among students. Interestingly, an earlier booster, Vivek Wadhwa, no longer believes that tech is a panacea, but now he thinks, “Technology. . . is going to disrupt industries and create unemployment on a scale that we haven’t imagined before.”

PBS didn’t connect the dots with immigration, but massive future unemployment certainly means America doesn’t need to import workers from abroad to carry golf bags or pick crops or anything else. Citizens will need every one of the jobs that hasn’t disappeared. Because of the smart machine revolution, the correct number of immigrants is ZERO.

Solman also observed an OSH robot that guides customers to their desired products in an Orchard Supply Hardware store.

Below, the OSHbot helps a customer find a desired hardware item. The smart machine costs $50,000 and doesn’t require coffee breaks, healthcare or vacations. Or sleep: after business hours, it cruises around and updates its database of where products are located in the store. 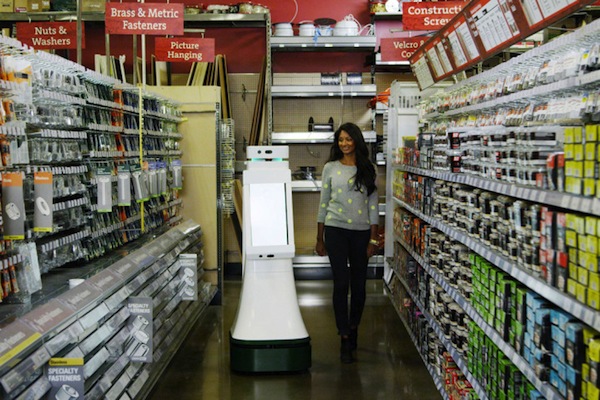 The PBS Newshour transcript of the segment:

GWEN IFILL: We have shown you before the rising role that automation and robots play in some parts of the work force.

Tonight, we have a more sobering and perhaps somewhat eerier picture of how those trends are gathering force more quickly than anticipated.

Economics correspondent Paul Solman looks at the promise and perils of the rise of the robot, part of our weekly series Making Sense, which airs every Thursday on the NewsHour.

PAUL SOLMAN: The 11th hole at Stanford University. Chad Gray’s an OK golfer, but his caddy is really hard to beat.

CHAD GRAY, CaddyTrek: It’s going to go wherever you want it go. Follows you like a puppy dog.

CHAD GRAY: It has two ultrasound bars that send a signal back to the remote that’s on my back pocket here.

PAUL SOLMAN: But the implications for America’s caddies, and millions of other workers, are ominous, says computer scientist and serial entrepreneur Jerry Kaplan. Kaplan has his own labor-saving schlepper, an R2-D2 designed to make local deliveries.

This is the Stanford Jackrabbot.

PAUL SOLMAN: As in robot?

JERRY KAPLAN: That’s right. It’s like a jackrabbit, but it’s a robot. It’s designed to operate in socially appropriate ways in pedestrian spaces.

PAUL SOLMAN: Jack looks harmless enough. But he, like CaddyTrek, is the shape of things to come.

JERRY KAPLAN: We’re about to see a significant increase in the acceleration in the rate of automation.

PAUL SOLMAN: And the age-old fear of displaced workers, says Kaplan, is finally, irrevocably upon us.

JERRY KAPLAN: What happens to people who simply can’t acquire or don’t have the skills that are going to be needed in the new economy?

PAUL SOLMAN: Well, what is going to happen to them?

JERRY KAPLAN: We’re going to see much worse income inequality. And unless we take some humanitarian actions, the truth is, they’re going to starve and live in poverty and then die.

PAUL SOLMAN: Kaplan offers that grim prognosis in a new book, “Humans Need Not Apply.” He knows, of course, that automation has been replacing labor for 200 years or more, for decades, eliminating relatively high-paying factory jobs in America, and that new jobs have more than kept pace, but not anymore, he says.

You’re the guy from the same-day delivery piece.

Now, by pure chance, a case in point happened to notice Jackrabbot being put through his paces. We’d met Mike Cannon a few months earlier when shooting him delivering packages for Google Express.

MIKE CANNON, Google Express: So, I’m delivering DNA samples to all of the various labs on campus.

PAUL SOLMAN: And you were just watching us shoot.

MIKE CANNON: And it caught my attention. I thought, that’s my replacement.

PAUL SOLMAN: At a hardware store in Silicon Valley, OSHbot.

PAUL SOLMAN: Are you serious?

PAUL SOLMAN: A joint venture between the Lowe’s chain of stores and a startup called Fellow Robots. Without ever needing a coffee or bathroom break, its voice recognition software, fluent in multiple languages, and laser sensor safety technology can do a better job than many of America’s five million or so retail workers.

JERRY KAPLAN: Maybe 50 percent of the retail clerks could be replaced by this kind of technology. And, of course, this is just the beginning.

PAUL SOLMAN: Now OSHbot’s inventor, Marco Mascorro, disputes that his baby would put anyone out of work.

MARCO MASCORRO, OSHbot Inventor: No, I don’t think so. I think this is really a tool that helps people find things in a store with very specific information.

PAUL SOLMAN: And if you think, well, OSHbot still seems a bit clunky as a replacement for humans…

MAN: After you, Kema.

PAUL SOLMAN: … in downtown Palo Alto, Suitable Technology’s Beam telepresence robot sells itself, with no humans on site at all.

WOMAN: Beam is a smart presence system, so it allows us to beam in anywhere in the world where we have a Wi-Fi connection and maneuver this device on our keyboards here.

JERRY KAPLAN: The problem in retail is staffing. You have people standing around in the stores often just waiting for people to come in.

JERRY KAPLAN: And then you have got customers at other times that are waiting and can’t get help.

MAN: We have had a couple of banks actually start to use them, where, if all of a sudden a secondary location gets swamped, you could have a couple of tellers from the first location actually beam into that second location, and now you have instantly doubled the staff, without actually doubling the staff and hiring twice as many people.

WOMAN: And sit here in the desert, where I want to live, but I can still work in California.

PAUL SOLMAN: Is there any sensitivity on your part about replacing people?

MAN: Well, I don’t think it’s as much as replacing people. We definitely want to stay away from automation, because somebody needs to be on Beam at all times.

PAUL SOLMAN: What do you mean it’s not automation? You’re the personification of automation.

MAN: Ultimately, for us, we’d like to give more jobs to people that they wouldn’t normally be able to have or do, like myself and Kema.

PAUL SOLMAN: But if you’re in Utah and you are servicing lots of customers in maybe multiple stores, right?

PAUL SOLMAN: You are replacing the jobs of people who would be in the stores themselves. Isn’t that just obvious?

WOMAN: Well, a person still needs to operate the device. We’re not robotic, so to speak.

PAUL SOLMAN: Are they being defensive about not replacing jobs?

JERRY KAPLAN: Because you’re talking to two people that have jobs. The one you’re not interviewing is the person who didn’t get a job working in this store here locally.

PAUL SOLMAN: I was also not interviewing the heads of companies that provide robots at local hotels, robots that can thin out lettuce crops.

JERRY KAPLAN: The reaction people have here seems to be similar to, if you called up a tobacco company and said, I would like to do a story on smoking and health.

PAUL SOLMAN: So when you called up companies for this shoot to appear on the PBS NewsHour, they said, not if it’s about displacing labor?

PAUL SOLMAN: Now, in fairness, not everyone in the Valley was afraid to admit that robots are labor-saving devices.

Are you OK with the fact that this is going to replace thousands, maybe tens of thousands of caddies?

CHAD GRAY: Absolutely. And this technology can be applied to other types of jobs as well, porters, bellhops, stockroom clerks, anywhere where heavy lifting is involved.

PAUL SOLMAN: Of course, new jobs are being created in Silicon Valley. That’s why entrepreneur Vivek Wadhwa confidently told us this in 2012.

VIVEK WADHWA, Wadhwa.com: The convergence of these technologies will create jobs in areas we can’t even think of.

PAUL SOLMAN: But these days, Wadhwa is singing a different, dolorous tune.

VIVEK WADHWA: Technology’s moving faster than anyone believes. And it is going to disrupt industries and create unemployment on a scale that we haven’t imagined before.

PAUL SOLMAN: Why did you used to think it wasn’t going to be a problem?

JERRY KAPLAN: People in the Silicon Valley believe that what we’re doing is God’s work, and we are making the world a better place.

JERRY KAPLAN: Here we are in paradise, but we’re standing in front of Rodin’s “The Gates of Hell.”

PAUL SOLMAN: So, in your dystopia, there are millions of Americans who literally are out of luck and are facing a grim future, because they simply don’t have the skills to sell in the new economy.

JERRY KAPLAN: I think that’s true. Here’s the good news. The U.S. economy has doubled, reliably, about every 40 years for several hundred years now. So, when you look out 40 years from now, we’re going to have twice as much wealth as we have today. The question is, who’s going to get that wealth? Is it going to be concentrated in the hands of an elite, or is it going to be distributed more widely?

This is economics correspondent Paul Solman, reporting, in as human a way as is still possible, for the PBS NewsHour from Silicon Valley.