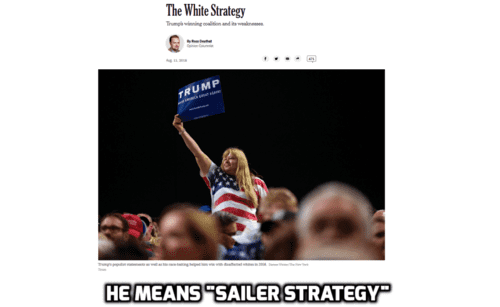 Ross Douthat On The Sailer Strategy: "Circulating for Years on the Margins of Conservatism"

The White Strategy
Trump’s winning coalition and its weaknesses.

In the aftermath of the 2012 election, when just about everyone assumed Mitt Romney lost because he didn’t win enough Hispanic votes, the election analyst Sean Trende produced a dissenting take. A close look at the results across the Midwest and Appalachia revealed a large population of what Trende called “missing white voters” — a mostly working-class constituency that simply declined to turn out in the Romney-Obama contest, and that a future (and more populist) Republican might win.

Trende was misunderstood by certain critics as making a normative argument that the G.O.P. should double down on being a white party. In reality, he suggested that a Republican Party with a more populist economic message might win the missing whites and more minority votes as well.

But an explicit “double down on white voters” argument has circulated for years on the margins of conservatism,

It’s really weird who He Who Must Not Be Named is. I mean, it’s weird in the sense that You Know Who isn’t very weird, just a guy with an Excel spreadsheet who worked out the math of the Electoral College back in 2000 and saw that Karl Rove’s celebrated plan to trade amnesty for Hispanic votes didn’t make as much sense for the GOP as winning over blue collar folks in the Great Lakes region.

and it had obvious influence over Donald Trump’s campaign strategy in 2016. His mix of economic populism and deliberate racial polarization was supposed to be demographically foredoomed — but instead it won him precisely those regions Trende’s analysis had highlighted, and the presidency as well.

For a sense of why this happened, in defiance of so much prognostication, look at the new Pew analysis of the 2016 election, which relies on voter files to create a more accurate assessment of who actually voted. Compared to exit polls, a couple of things stand out: First, Pew has whites at 74 percent of all voters (CNN’s exit poll had them at 71 percent)

Exit polls have to decide ahead of time where to send pollsters to interview exiting voters. They are more worried about undersampling minority groups than undersampling whites, and they have to make sure to hire enough Spanish-speaking pollsters. For these reasons, exit polls have a long history of overestimating the Hispanic share of the vote.

and second, it has whites without a college degree, Trump’s key constituency, at 44 percent of all voters (compared to just 34 percent for CNN).

Exit poll results tend to exaggerate educational levels. My guess is that respondents tend to think things like, “I took a night class once at State, so that makes me “Postgraduate” education, right?” And exit polling is really rushed (the whole world wants to know who is going to be elected President as soon as possible), so the pollster usually doesn’t have time to answer technical questions.

In other words, both conventional polling and conventional wisdom underestimated the potential for white turnout generally and working-class white turnout specifically — and that’s why Trump’s strategy was able to carry him to victory.

The numbers offer a cautionary tale for both emerging-Democratic-majority inevitabilists and for a left whose increasing vehemence about the wickedness of “whiteness” probably encourages the white tribalism that Trump rallied and exploited.