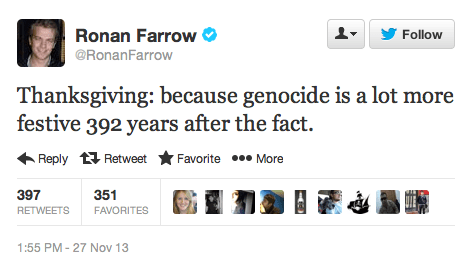 Ronan Farrow On Thanksgiving And Genocide

Ronan Farrow [Twitter], is the son of Mia Farrow, [Twitter] and either Woody Allen [has no conception of Twitter] or, if you believe certain rumors, Frank Sinatra.

He has the good looks typical of of Sinatra, and the extraordinarily high IQ (college at 15, Yale Law, Rhodes Scholar) you would be more likely to associate with Allen. But he could have got either of them from his mother, so who knows?

Here are the tweets of Ronan Farrow on Thanksgiving:

Thanksgiving: because genocide is a lot more festive 392 years after the fact.

This Thanksgiving, let's give thanks for what we have and also awkwardly apologize to the Native Americans we slaughtered to get it. 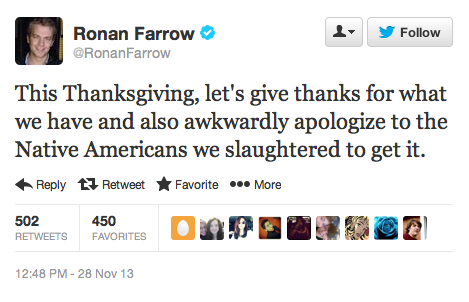 He's getting some pushback from normal Americans, and support from Glenn Greenwald.

Look like @RonanFarrow will learn: the most controversial thing to do in US political discourse is tell the truth http://t.co/rfur9ccnA6

If you're getting support from Glenn Greenwald, you know you've said something evil.

It's all part of what I was talking about when I wrote Thanksgiving Is Racist Because America Is Racist.