One of the major points of conflict in areas where Muslims and Christians share nations is the attempt of Allah’s willing slaves to institute sharia law for everyone. That means a mostly low-intensity warfare against the rights of any and all non-Muslims. Sometimes things get violent, as in 2000 when nine people died over home-made beer sales (BBC — Nigeria: Deaths over Drink). A recent flare-up of sharia imposition was a major campaign of Muslims and machines against beer in the city of Kano. 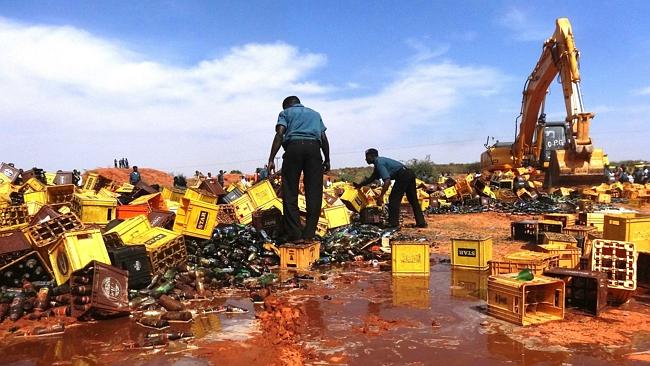 The video below shows great enthusiasm among some beer smashers for their task.

Regular infidel folks in Africa appreciate their brewskies. When the Islamic jackboot was removed in Mali by French troops, the steins were brought out in celebration (see Beer Returns to Mali after Liberation from Sharia). But no such rescue is in the offing for Kano Christians and animists.

Why would any civilized society allow Muslims to immigrate into their country? The Census counted the number of Nigerian-born persons at 228,953 as of 2011, but without religious affiliation.

Police enforcing Islamic law in the Nigerian city of Kano have publicly destroyed nearly a quarter of a million bottles of beer as part of a crackdown on “immoral” behaviour.

The banned booze had been confiscated from trucks coming into the city in recent weeks, according to officials from the Hisbah, the patrol tasked with enforcing the strict sharia law.

After destroying some 240,000 bottles, the city’s Hisbah chief Aminu Daurawa said he had “the ardent hope this will bring an end to the consumption of such prohibited substances”.

A large bulldozer was used to smashed the bottles to shouts of “Allahu Ahkbar” (God is Great) from supporters outside the Hisbah headquarters in Kano, the largest city in Nigeria’s mainly Muslim north.

“We hope this measure will help restore the tarnished image of Kano,” said Mr Daurawa.

Since September, the Hisbah have launched sweeping crackdowns and made hundreds of arrests in Kano following a state-government directive to cleanse the commercial hub of so-called “immoral” practices.

The 9,000-strong moral police force works alongside the civilian police but also has other duties, including community development work and dispute resolution.

Sharia was reintroduced across northern Nigeria in 2001, but the code has been unevenly applied.

Alcohol is typically easy to find in Kano, including at hotels and bars in neighbourhoods like Sabon Gari, inhabited by the city’s sizeable Christian minority.

But the Hisbah boss vowed that this was set to change.

“We hereby send warning to unrepentant offenders that Hisbah personnel will soon embark on an operation into every nook and corner of (Kano) state to put an end to the sale and consumption of alcohol and all other intoxicants,” Daurawa said.

It’s not just booze in the firing line.

People accused of engaging in prostitution and homosexual sex have been among those arrested in the latest crackdown, along with alleged drunks and drug addicts.

Nigeria is divided between a mostly Christian south and a predominately Muslim north.