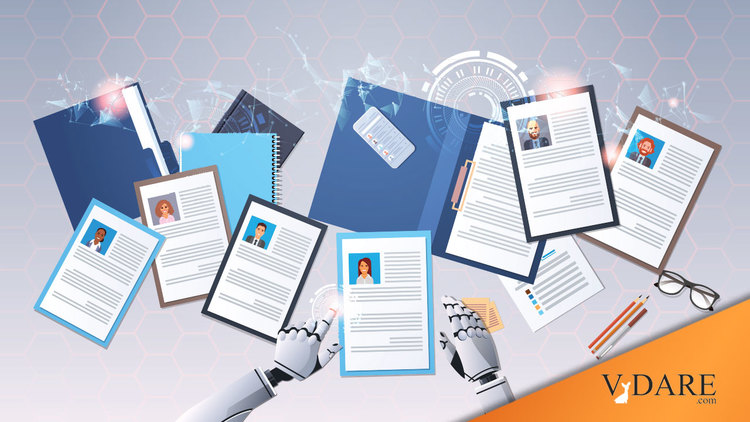 Roland G. Fryer Jr. is an economics professor at Harvard University, a fellow at the Manhattan Institute and founder of Equal Opportunity Ventures.

Fryer is Harvard College’s superstar economist who does a lot of interesting, often politically incorrect studies. He was Harvard College’s highest paid professor because he brings in huge grants from donors like Michael Bloomberg to try social science experiments that aren’t obviously stupid.

But then he got MeTooed for, as far as I could tell, being interested in the opposite sex without putting a ring on it.

… But affirmative action is very often not targeted at individuals who, because of disadvantage, are achieving below their potential. Seventy-one percent of Harvard’s Black and Hispanic students come from wealthy backgrounds. A tiny fraction attended underperforming public high schools.

A half century ago, at the dawn of affirmative action, Harvard let in some male urban achievers from the deepest reaches of the ghetto. Unfortunate Incidents ensued involving the physical safety of other students.

By the end of the 70s, prep schools had set up their affirmative action pipelines as well, so Harvard was happy to accept blacks who’d made it through Choate without any Unfortunate Incidents.

First- and second-generation African immigrants, despite constituting only about 10 percent of the U.S. Black population, make up about 41 percent of all Black students in the Ivy League, and Black immigrants are wealthier and better educated than many native-born Black Americans.

There’s something very wrong with post 1964 Civil Rights Act African-American culture that blacks from liberal America are less and less able to compete with blacks from more socially conservative cultures in Africa.

Nobody notices that because of the antiquarianism of contemporary American discourse. Who can possibly remember any history more recent than Emmett Till, such as that liberals have been largely in charge of all matter racial for the last 60 years or so, and yet after all this spending and promoting everything black, African-Americans are falling further behind Third World black bourgeois students?

How can affirmative action be made consistent with true meritocracy? How can the minority applicants who have lower scores but high potential be distinguished from those who just have low scores?

The answer is simple: Use data more rigorously. The problem is not affirmative action per se. The problem is lazy implementation of it as a set of blunt racial preferences.

If racial diversity is the only goal, then explicit racial preferences — which are already illegal — are the most efficient way to achieve it. Mathematically, the optimal policy amounts to treating each race as a distinct applicant pool, and then admitting the top students from each one.

Under this approach, students of all races will disproportionately come from wealthier backgrounds, because grades, test scores and other factors used in admissions are positively correlated with parental income.

What if, instead, admissions involved the use of sophisticated analytics to predict which applicants stand to become the future top performers?

Evidence is accumulating that machine-learning algorithms can make better decisions than humans, especially when bias is present. A Cornell study of data on judges’ bail decisions found that computer predictions could reduce crime as much as 25 percent with no change in jailing rates. A Stanford University study found that a machine-learning algorithm performed as well or better than trained radiologists on screening X-rays.

And robots can’t be racist, the whole concept is absurd.

Why not use this approach in college admissions?

Because you’d end up letting in more white boys from Nebraska with strong shape-rotator cognitive skills.

A machine-learning model would be fed historical admissions data, including candidates’ family background and academic achievement, and noncognitive skills such as grit and resilience, along with outcomes of past admission decisions. It would use these data to predict new applicants’ performance — as defined by each institution, such as college grade-point average or income 10 years after graduation. The model could figure out which characteristics best predict performance for various subgroups — for example, how salient SAT scores are for public-school Black students raised in the South by single mothers vs. private-school White kids from the Northeast. If we use only unadjusted test scores, all that context is lost.

A really important question is how valid are the super-high college admissions testing scores that Asians have been earning in this century. Do they accurately predict post-grad test scores like the MCAT and LSAT? Do they predict income? Enquring minds want to know.

This approach would sidestep other thorny issues in college admissions as well. If, as some have argued, the SAT test is racially biased, the algorithm could place less weight on scores for Black students. If students who demonstrate resilience as children are more likely to be hidden gems, the data will show that, too.

Here’s what they’d find: the demographic most underexploited by elite colleges is Red State white boys who don’t know all the tricks and traps about how to worm your way into college, the ones who took the SAT or ACT only once, having prepped for it by taking one practice test; the boys who wrote their application essay about becoming an Eagle Scout; the ones who don’t realize that using “equality” instead of “equity” in your essay is now a Red Flag.