It’s odd that the Gang of Eight amnesty senator who’s running for president is the one to bring up the smart machine danger to employment, albeit with an inaccurate regulation slant. 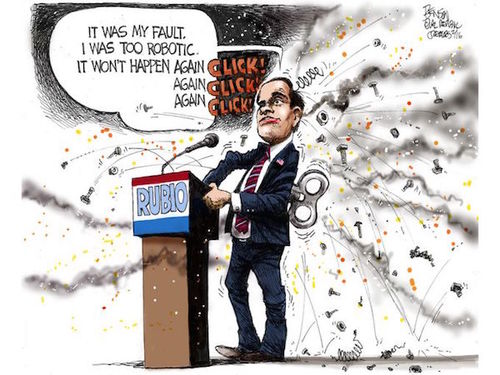 Robot Rubio apparently thinks that Department of Labor regulations are the cause of mass mechanization, when it’s simply the affordable cost of the machines that makes them appealing to business owners.

Naturally, the amnesty senator won’t connect the dots between smart machines and the obsolescence of immigration as a source to fill those mythical “jobs Americans won’t do.” Oxford University researchers predict that nearly half of US jobs are susceptible to automation within the next 20 years, so the citizens will need every remaining job in the approaching mechanized workplace.

If the Department of Labor continues to make it difficult for companies to hire American workers, Sen. Marco Rubio (R-FL) warned, robots would take over key jobs in the economy.

During a town hall in Okatie, S.C., Rubio warned that the Department of Labor was too big, too powerful, and turned into “anti-business agency” that hurt the private sector.

Rubio made his remarks after a supporter tried to make light of the recent “robot” criticism of Rubio’s campaign message delivery.

“As far as the robot stuff, just keep in mind the Terminator was elected twice in California,” the supporter joked when he got the microphone. But the questioner quickly turned serious, asking what Rubio what he would do as president to control the Department of Labor.

“You joke about robots, let me tell you what all these rules are going to do, they’re going to accelerate pace of automation,” Rubio said, referring to the increased amount of job losses through automated machines.

“Maybe you can’t do that in a management position … but maybe you can,” he warned. “The more expensive you make people, the faster they’re going to move to a machine or outsourcing. It’s just going to happen.”

Rubio criticized President Obama’s Labor Secretary Thomas Perez who was “basically a representative of labor unions masquerading as the head of the Department of Labor” arguing that it had become “the worst it has ever been.” He pointed out that it was part of Obama’s “systematic effort” to make the government be in charge of running the economy — including health care and education.

Rubio spoke to a crowd about about 500 people in Okatie this morning according to his campaign, answering several questions about what he would do as president.