Robert Spencer, head of JihadWatch.org, appeared with Tucker Carlson on Tuesday to discuss the scary uptick in censorship in the world of the internet and online commerce. (See also Tech Companies Are Making Us Less Free, Warns Tucker Carlson.)

Robert Spencer has been a long-time critic of hostile Islam who has written many fine books, several of which I have read and found very informative. The JihadWatch Youtube channel has hours and hours of great stuff — hopefully that won’t disappear under the current PC hysteria.

Spencer doesn’t just observe aggressive behavior by Muslims against us infidels: he shows that such bellicosity is a requirement commanded by the Koran, a point he underlined when appearing on Fox, “. . .the jihadis can and do point to the texts and teachings of Islam to justify violence.”

Unsurprisingly, the Southern Poverty Law Center — an evil propaganda arm of leftist lies — played a big part in besmirching Robert Spencer’s excellent body of work informing the West of jihad dangers. Left-leaning writer Ken Silverstein famously blew the whistle on the SPLC in a 2000 Harper’s magazine piece that emphasized the fraud and money-grubbing. That important article,“The Church of Morris Dees,” may be read here. Later, Silverstein remarked, “. . .the SPLC shuts down debate, stifles free speech, and most of all, raises a pile of money, very little of which is used on behalf of poor people.”

In addition, the Center for Immigration Studies published a report on the sketchy organization in 2010: Immigration and the SPLC.

Yet the disreputable SPLC continues to make millions of dollars by spreading lies: in 2017 it reported its endowment fund to be $319.3 million. Its 2016 financial report shows piles of money and also notes its activity in “protecting immigrants’ rights” — meaning illegal aliens. The SPLC received $2.5 million in donations following the Charlottesville violence — small spuds in the organization’s big financials, which show revenue of $54 million in 2015.

Robert Spencer appeared on Fox News to discuss the current censorship mania from Silicon Valley, and he appeared happy to have won a round against the anti-freedom left. 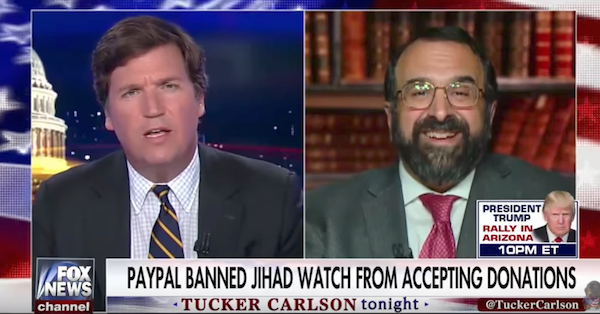 TUCKER CARLSON: Just a couple of weeks for the left’s newfound distaste for free speech to start spreading into new areas, not just hate groups, but people they just disagree with. After Charlottesville, online payment platform PayPal announced it would deny service to so-called hate groups, so this would cut off service to Jihad Watch, which is not a hate group, not even close. They’re a site that’s worried about radical Islam. Service was eventually restored after there was an outcry online, but it’s not a reassuring sign. Robert Spencer is the man that’s happened to. He founded Jihad Watch and he joins us now. So Robert you were denounced as a hate group by the Southern Poverty Law Center which is a completely ersatz phony left-wing lobby group posing as a human rights organization — totally dishonest — and then what happened next?

ROBERT SPENCER: Well a reporter from ProPublica which is a Soros-funded publication, contacted me, pointed out that Jihad Watch has a donation link via PayPal as well as my books for sale at Amazon.com and Newsmax news links and said what would you do if all this was cut off because you’re a hate group, as according to the Southern Poverty Law Center. And I tried to actually reason with this reporter Lauren Kirchner and tell her the implications of what she was suggesting and saying that if you are allowing that people with unpopular political opinions be cut off from these platforms, you better hope that doesn’t turn on you, and your positions don’t become unpopular sometime in the future. But she published her article. It led off with me, denounced me, noted the Southern Poverty Law Center’s absolutely spurious claim that I’m some sort of hate group leader, and within hours I was notified by PayPal that I can no longer use their platform. CARLSON: What was so remarkable about the ProPublica piece, the Lauren Kirchner piece that you’re referring to which I just read, is that at no point does it described in any detail the views that are supposedly hateful that you hold. It just described you as a member or the leader of a hate group but it never told viewers or readers what that means. It was by definition propaganda; it was garbage. Did did you write about this? SPENCER: Yeah sure, I wrote about it on Jihad Watch and pointed out that Lauren Kirchner had not made any effort to verify whether the Southern Poverty Law Center was right or not about whether I’m a hate group: the left seems to consider the Southern Poverty Law Center infallible in matters of who’s a hate group and who isn’t. So who’s watching the Watchmen? What are the biases of this supposed neutral arbiter? CARLSON: So I actually went to the Southern Poverty Law Center website: it hurt me to do that, but for the purposes of this segment, I made myself and went to the entry on you, and because I wanted to know. I mean, if you’re saying things that I’m appalled by, I don’t want to have you on, or I want to call you on them anyway on the air. I couldn’t find anything in your write-up that was even particularly controversial or out-of-bounds. Do you know what exactly they’re holding up as an example of your hatefulness? SPENCER: I think that what we have here is the left very common tendency to take statements that are absolutely true that they don’t like and portray them as hateful. One of the main things that I say in my work is that the jihadis are working from real traditions within Islam. They’re not all Muslims by any means and all that not all Muslims are terrorists or believe in what the jihadis believe in, but the jihadis can and do point to the texts and teachings of Islam to justify violence and make recruits among peaceful Muslims. Now this is an obvious fact that I’ve documented thousands of times on Jihad Watch, but as far as the left goes, if you even suggest that Islam is not a religion of peace or that might not be a religion of peace in every conceivable way, then you’re a hate monger and a bigot and an Islamophobe. CARLSON: Ayaan Hirsi Ali was also listed on the SPLC website as a hater. This is someone who grew up in Somalia, and was the victim with female genital mutilation, but for criticizing that religion she’s a hater. Really quickly, can you think of any examples of people who criticize — I don’t know — Christianity who are on the Southern Poverty Law Center’s website as leaders of hate groups? SPENCER: Not only do they not have any, but of course leftists in general celebrate that sort of thing. Richard Dawkins, the famous atheist writer, a critic of Christianity, critic of Islam, critic of all religions and religion itself — he was recently disinvited from a speech in California because the organizers found out he criticized Islam. They thought it was great when he criticized Christianity, but criticizing Islam has been set up as the third rail, the thing you must not touch in the American public square. CARLSON: Why do the elites in our society hate themselves so much and hate our society so much, do you think? SPENCER: I think that it it comes from the idea of a certain kind of guilt over success, and that the West has been very successful and its culture is celebrated all over the world, and they feel guilty about that and think that we have to apologize and bring in all these other cultures to make up for this. CARLSON: It’s really sick. I wish Freud were still around for diagnosis. Thank you, thanks so much for joining us, and congratulations on being back among the living.