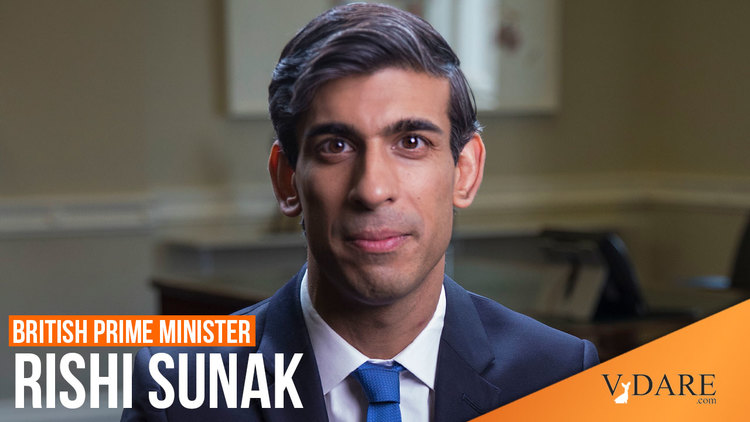 Earlier by James Kirkpatrick: New UK Prime Minister Rishi Sunak A Triumph For Globalists, Immigration Enthusiasts. Of Course, UK May Not Survive—But, Like US, Ruling Class Hates It Anyway

I have for the past two weeks been wondering aloud at Radio Derb whether new British Prime Minister Rishi Sunak is a genuine Britain First reformer or just another globalist tool. Well, we now have a couple more data points.

Data Point One:  The latest fad among the woke and virtuous is ”climate reparations.” The idea is that the prosperous, stable nations of the West will pay compensation to Third World poop-hole nations for messing up the atmosphere and causing climate change.

Prime Minister Sunak is totally on board. According to this report at The Daily Sceptic on Monday, November 7th, Sunak will make a speech at the COP27 climate-change conference in Egypt this coming Monday, the 14th, pledging 65½ million pounds of British people’s money ”for green technology in developing countries.”

Data Point Two:  One useful control to manage Britain’s horrendous problem of illegal immigration would be to set up a nationwide compulsory E-Verify system so that employers could check they’re not employing illegal aliens, with major penalties if they do.

Our own E-Verify works from Social Security Numbers. Britain has those too; they call them ”National Insurance Numbers.” So you’d think it would be easy to set up a system. Problem is, the politicians won’t hear of it.

A Member of Parliament for the opposition Labour Party told a radio program on Tuesday that his party was ”looking into” the idea. However, he was immediately slapped down by his parliamentary superior. ”No, no,” she said, ”absolutely not.”

A senior Labour frontbencher was slapped down by Downing Street and his own party boss today after suggesting compulsory ID cards for all Britons as a way of tackling the migrant crisis. https://t.co/X3FLiaLGTP

That little exchange prompted a reporter to ask if Prime Minister Sunak was open to the idea. Sunak’s spokesman replied that ”There are no plans for U.K. ID cards nor a national identity database.”

It’s looking more and more as though the answer to my question is: Globalist tool.