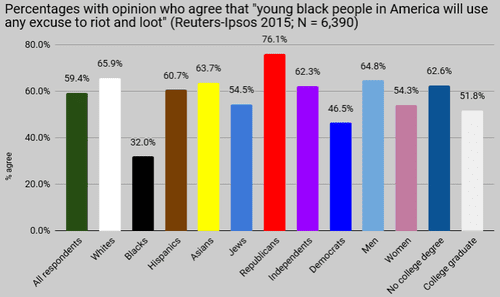 Riotous Youths And Teens: Poll Asked If It Was True That “Young Black People In America Will Use Any Excuse To Riot And Loot”.

In delving through Reuters-Ipsos’ polling archives I stumbled across a survey asking respondents whether or not they agreed with the statement “young black people in America will use any excuse to riot and loot”. The poll was conducted from the beginning of May through mid-August of 2015. To put it in proper context, recall that Freddie Gray died April 25th, less than a week prior to the poll’s commencement. Z-Man’s neighbors subsequently smashed and burned parts of what remained of Baltimore to the ground with the blessing of the mayor who infamously explained that the city “gave those who wished to destroy space to do that”. And destroy they did: The results shown exclude “neither agree nor disagree” responses, constituting 26.3% of the total. The percentages who agreed that young blacks will riot and loot on any excuse among the 74.7% who expressed an opinion: Majorities across the board, excepting blacks and Democrats–though even among non-black Democrats, more agree than disagree.