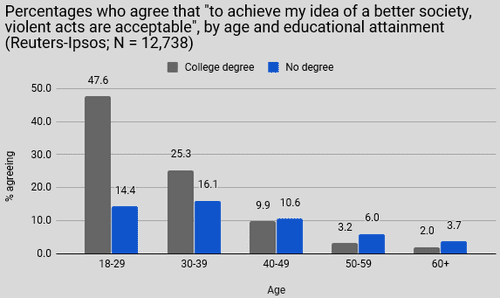 The New Student Radicals: Far, Far More Inclined Towards The Use Of Violence Than Non-Students

Revisiting a previous post on the expressed tolerance for violence as a means of achieving a better society, another interesting demographic angle I didn’t cover now jumps out at me. The idea of using violence is far more popular among those with college educations than among those without one. Percentages, by age and educational attainment, who agree that “to achieve my idea of a better society, violent acts are acceptable”: As the startling graph shows, this is not simply due to a higher percentage of younger people relative to older people both having college degrees and supporting violence. Millennials and Zeds who’ve gone through the post-modern university system are far, far more inclined towards the use of violence than those who have steered clear of academia. Among older generations, the trend moves modestly in the opposite direction, with the more educated expressing greater opposition to violence than their less educated cohorts.

Contemporary higher education is Western civilization’s fifth column. It indebts our young people. It marinates them in a violent hatred of their past and of their present in order to deprive them of their future. And it doesn’t just steal their future by turning them into civilizational sappers–it reduces their lifetime fertility more than anything else in society.