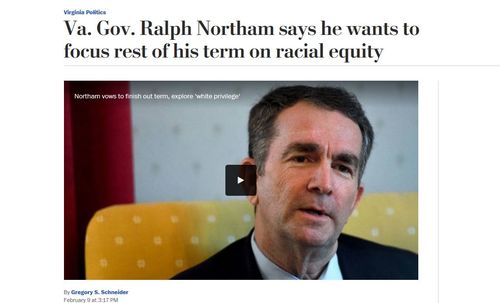 Governor Northam Vows to Not Resign; Instead, He Will Read Ta-Nehisi Coates and Raise Your Taxes

RICHMOND — Gov. Ralph Northam, in his first interview since a racist photo from his medical school yearbook came to light a week ago, promised to pursue racial reconciliation as he defended his vow to stay in office despite widespread calls for his resignation.

Northam (D), 59, said he wants to spend the remaining three years of his term trying to ensure that black Virginians have the same opportunities as whites.

Northam seemed chastened and subdued as he described a week of grappling with what “white privilege” means, with the reality of African American history, and with the personal failing of growing up after desegregation and the civil rights era while somehow not realizing that blackface is offensive. …

He said he is monitoring the situation involving Lt. Gov. Justin Fairfax (D), who is denying two sexual assault allegations, but that he has not made any decisions about who he might appoint as a replacement if Fairfax heeded calls to resign. …

The governor still contends that he is not in the photograph of one person in blackface and another in KKK robes but could not say how it wound up on his yearbook page, nor why he initially took responsibility for it, other than to say that he was “shocked” when he first saw it on an iPhone the afternoon of Feb. 1.

… Looking ahead, Northam said he has asked his Cabinet secretaries to come up with specific proposals to begin addressing issues of inequality, such as expanding access to health care, housing and transportation, and to begin reporting suggestions on Monday.

“It’s obvious from what happened this week that we still have a lot of work to do.

In other words: Me … I’m okay, you have a lot more taxes to pay.

There are still some very deep wounds in Virginia, and especially in the area of equity,” he said. “There are ongoing inequities to access to things like education, health care, mortgages, capital, entre­pre­neur­ship. And so this has been a real, I think, an awakening for Virginia. It has really raised the level of awareness for racial issues in Virginia. And so we’re ready to learn from our mistakes.”

Northam has been in seclusion all week, using tunnels to shuttle between the mansion and the nearby building where he has an office. He has met with African American legislators and faith and community leaders, and has begun reading up on race — “The Case for Reparations,” an article in the Atlantic by Ta-Nehisi Coates, a few chapters of “Roots,” by Alex Haley.

Northam said he has had painful conversations this week with black lawmakers — who continue to call publicly for him to resign — about the issue of blackface, and why it was wrong for him to wear it to portray Michael Jackson in a San Antonio dance contest in 1984, as he has admitted doing. …

Northam said he had been especially affected by a conversation with a black lawmaker, whom he declined to name, on the topic of blackface. He said he learned about the history of minstrel shows, where white people mocked black people “and exaggerated their characteristics and mannerisms.”

As opposed to rap music, in which blacks quietly discuss their love of homework and other non-stereotypical subjects.

Another black lawmaker, who he also declined to name, made a powerful point about white privilege, Northam said: That a white person who makes a mistake gets a second chance, while a black person might not. “That really helped put things in perspective for me to better understand why someone of white privilege has the opportunities that they have when an African American . . . doesn’t,” he said.

Think of all the blacks whose careers were instantly ruined for appearing in whiteface.

White Chicks by various Wayans is a pretty funny movie.

… “First of all what I plan to do . . . is to make sure that we have sensitivity training — in our Cabinet, in our agencies. I also plan to reach out to our colleges and universities and talk about sensitivity training. Even into the K through 12 age range, that’s very important.”