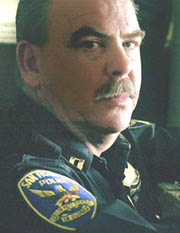 San Francisco Chronicle columnists Matier and Ross wrote today that Edwin Ramos (the illegal alien accused of murdering three members of the Bologna family) has not been the only foreigner criminal given a pass in the city (Illegal immigrant arrested 5 times before feds told).

But I was more interested in what retired SFPD Captain Tim Hettrich (pictured) had to say several paragraphs down about working with Chief of Police Heather Fong. (See my article about the political nature of the job of police chief, The Thin Blue Line Is Compromised at the Top.)

But according to retired police Capt. Tim Hettrich, who until recently headed the narcotics unit, Chief Heather Fong made it clear that she did not want officers to cooperate with ICE and other federal agencies when it came to arresting illegal immigrants for crimes.

Hettrich said it was "common knowledge" throughout the department that "you were not to do anything with ICE or immigration and illegals whether or not they committed a crime - even to arrest them - because there will be the perception we are harassing illegals."

Instead, the job was left to the Sheriff's Department, he said.

Hettrich said he had conversations with the chief about this issue over the years. The most recent, Hettrich said, was about nine months ago when he wanted to work with federal authorities on investigating the MS-13 street gang - one of whose alleged members, Salvadoran immigrant Edwin Ramos, has since been accused of killing a father and two sons on an Excelsior district street in June.

"You are not to work with these (federal) people," Hettrich recalled Fong telling him.

It's good to have one of San Francisco's top cops say in print that politicians thwarted police in their efforts to enforce laws against criminal aliens. As the former head of the narcotics unit for several years (he retired as captain of Mission Station in early July), Hettrich has been in the center of the storm between permissive City Hall and the need for public safety, so he knows what has been going on.