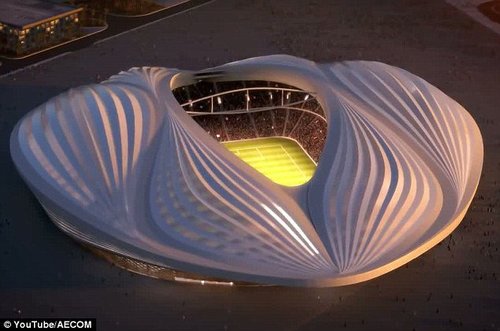 A wild morning in the world of soccer.

?Update:?? Swiss authorities have charged FIFA President Sepp Blatter with “criminal mismanagement” and “misappropriation,” and have raided his office in connection with the investigation. It is unclear whether the charges are related to Qatar’s World Cup bid.

?FIFA, soccer’s international governing body, has announced that the 2022 FIFA World Cup in Qatar will officially be staged during the winter. The tournament will begin on November 21 and the final will take place on Sunday, December 18.

The decision is not unexpected, but it confirms that Qatar’s bid to host the tournament was successful despite the fact that conditions in the Gulf state during the World Cup’s normal staging period—in June and July—?are unsuitable for, you know, playing soccer. …

The extreme summer conditions were one of the factors fueling the controversy surrounding Qatar’s bid, along with the country’s sketchy record on human rights. There were widespread allegations of bribery and vote-buying following the 2010 announcement, and in May the United States Department of Justice arrested a number of FIFA officials on corruption charges, many of which directly concered the Qatari bid.

Many of soccer’s top club league seasons, which normally span from August to May, are expected to be suspended during the tournament so that players can travel to participate.

So, the World Cup is being shortened by 4 days to fit better into the middle of regular club season. Pre-World Cup national team practices will likely be slashed to a minimum, so you can expect to see some disorganized soccer in the 2022 World Cup.

It’s time for the world to take a moral stand: move the 2022 World Cup back to 2010 host South Africa and tell Qatar to repurpose its $200 billion budget to throw itself a World Cup party to help its fellow Arab Muslim refugees so they don’t have to humiliate Islam by turning to infidel Franks for supports.