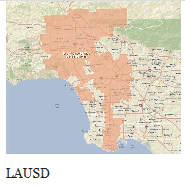 I’ve mentioned many times that, in my experience growing up in Los Angeles’s San Fernando Valley in the 1960s and 1970s, white flight from the public schools was pretty much Jewish flight to avoid integration due to the 1978 mandatory school busing imposed by an ACLU lawsuit on the giant Los Angeles Unified School District.

Why? Back then, Catholics tended to go to Catholic schools, and Protestants lived in independent school districts like Pasadena, San Marino, and Orange County.

Moreover, San Fernando Valley Jews were highly enthusiastic about public schooling. One of my older memories is hearing from my Jewish teammates on my baseball team at the local park that Catholic schools were kind of un-American. Jews went to public schools to demonstrate their commitment to civic Americanism.

But then, very quickly, they stopped.

Yet that massive historical example that happened 38 years ago at the heart of the world capital of the entertainment industry has largely been lost in the mists of time. Thus, when 27-year-old Atlantic interns denounce all those horrible white people who white flighted away from integrated schools, they tend to picture evil white Southerners who were probably secret Klansmen, meatheaded Catholic ethnics, and snobby WASPs who wouldn’t let Nana’s father into their anti-Semitic country club, but not people like them.

So, I figured I’d better post a rare 21st Century article documenting that I’m not just hallucinating all this history. From the Jewish Journal of Los Angeles seven years ago:

With the many LAUSD schools having spotty reputations, and given the array of private schools to choose from, Jewish support for Los Angeles public schools in recent years has been at best tepid. But that wasn’t always the case.

Jews in L.A. have had a long and textured relationship with the public education system. From the 1890s, when the city first established elementary and high school districts, through to the 1960s, public education was a mainstay of the Jewish community.

But when school demographics began to shift as working class Latino and African American populations burgeoned, many Jewish families pulled out of public schools and migrated to the private realm.

The Jewish exodus from LAUSD reached its peak during the desegregation movement of the 1970s. After the ACLU filed a lawsuit in 1963 to end segregation in L.A. schools, the LAUSD board created voluntary integration programs, introducing magnet schools and giving district schools the option of busing students from lower-performing facilities to higher performing schools. In 1976, the California Supreme Court charged state school districts with enforcing integration. In response, two years later the L.A. school board began a sweeping mandatory busing program that would reassign more than 60,000 students, transferring minority children from downtown and South L.A. to predominantly white schools in the San Fernando Valley and the Westside, and vice versa.

This was a particularly nuts example of the high tide of liberal social engineering since it involved busing kids from the San Fernando Valley over a mountain range — the Santa Monica Mts. / Hollywood Hills — and down to South-Central L.A.

Students often were bused up to an hour away from where they lived, and the move caused a public outcry among both whites and minorities over what many parents saw as “the end of neighborhood schools,” according to former LAUSD school board member David Tokofsky. Racist and classist prejudices also turned some white families away.

In the first year of forced busing, the district lost 25,000 white students, recalled Shel Erlich, the former longtime head of the LAUSD communications office. In the second year, an additional 17,000 left. In 1981, after only three years, California residents voted down all mandatory busing programs and the plan in Los Angeles was suspended.

But the damage had been done – in the late 1970s, Erlich said, the district was about 30 percent white; now, that number hovers below nine percent.

“[Busing] drove a huge number of Jews from the public schools,” said local author and Jewish Journal columnist Bill Boyarsky. “Parents were not comfortable sending their children to a school where their kid might be the only white person in the class.”

Jewish leaders had taken both sides of the busing debate. Educator Jackie Goldberg, who would later win seats on the Los Angeles City Council and the California State Assembly, headed the controversial Integration Project in the late 1970s that pushed for mandatory busing. Activist and later U.S. Congresswoman Bobbi Fiedler, on the other hand, led the vocal Bustop movement in the Valley that fiercely opposed busing and challenged the program in court.

So, I wanted to get this on the record because it’s otherwise disappeared down the Memory Hole.

Thus, when the young lady from The Atlantic reads Matthew Weiner, creator of Mad Men, going on and on in interviews about how he could tell there were anti-Semites lurking everywhere in 1981 at ultra-exclusive Harvard-Westlake in the Hollywood Hills (which was then 40% Jewish), she feels a righteous thrill. Meanwhile, it never occurs to her to wonder why Weiner’s parents were paying for him to attend an exclusive school founded by Episcopalians, when just a few years before they would have thought it right and fitting to utilize Los Angeles’s fine public school system. The young lady from The Atlantic could empathize more with the creator of Mad Men more than she can empathize with the Klansmen, Catholic ignoramuses, and the WASP anti-Semite golfers for whom she blames the failure of school integration, but she’s almost never called upon to wonder why Weiner’s Hancock Park parents put him in private school.

It just doesn’t come up. Why would anybody who is professionally interested in the history of white flight from the public schools ever think about something as obscure as America’s second largest school district, which happens to be in the second most televised place in America?

By the way, one of the funnier interviews with Weiner was conducted by David Samuels, who is now being widely denounced by the members of the Obama Administration media echo chamber for inducing Obama speechwriter Ben Rhodes to spill his guts a little too frankly for the Administration’s good.

But Samuels does this to everybody, especially fellow Jews: he’s supersmart about getting inside his subject’s head and getting him to talk about his motivations that he normally keeps under wraps.