Here’s video of NYC’s notorious Hug Thug, Jermaine (a.k.a., Jeremy) Himmelstein, flattening a young lady from Canada in Times Square a couple of days ago.

Here’s another version of the video that shows more of the lead-up to the attack.

… Jermaine Himmelstein is well known in the Big Apple as the “Free Hugs Guy,” and because of the low level of financial support given to Americans struggling with mental health issues, he relies on tips in exchange for photographs to survive.

Himmelstein punched another young lady in late April in the 42nd Street subway station when she said she didn’t want a hug, and nobody in authority did anything at all about him, with the cops telling the victim he’d just get off because he’s a loon so whaddaya whaddaya (at that point he’d been arrested 15 times).

As I said before, I live on the other side of the country and even I’d been hearing for years about this Free Hugs Guy going to tourist destinations and slugging young women. Here’s his picture in the NY Post in 2012 and here’s a 2013 NYT article about him injuring a girl. 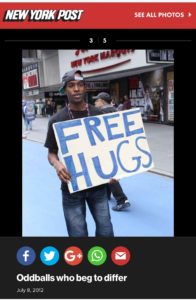 The man often seen strolling the boardwalk in Coney Island carrying a “Free Hugs” sign may also carry a mean punch! Local resident Vin Torre along with other witnesses contacted us over the weekend, notifying us that on last Saturday, April 18th at 2:10pm, Mr. “Free Hugs” knocked out a young girl in her early 20’s directly in front of the boardwalk entrance to Luna Park. According to Torre ” Me and my wife saw this girl on the floor with her face swollen! The girl’s face was bad! We called 911 and the girl’s friends pointed to the guy holding the “Free Hugs” sign! We were outraged because minutes after the incident he was back on the boardwalk giving out free hugs!”

I have no idea why the Hug Thug had escaped serious trouble for so long: maybe his Autistic Mike Tyson Jr. affect causes judges not to take him seriously? Yet, shouldn’t the fact that he talks just like Mike Tyson have been cause for alarm, not reassurance?

It’s past time to lock this guy up for a long while.

But I was thinking about the general problem of people who aren’t quite right in the head. It’s expensive to keep individuals with a less severe track record locked up year after year, but it’s irresponsible to the public safety just to let them go unheeded. It seems like there may be more technocratic things we could be doing to keep them away from situations they have a track record of not being able to deal with.

The British have been trying out various Clockwork Orange techniques as an alternative to long prison terms. They used court orders against specific behaviors that tend to lead a particular individual to trouble: Labour called them Anti-Social Behavior Orders (ASBOs) from 1998-2014, but they became unpopular and the Tories have changed the name. Still, I suspect that the new high tech GPS tracking technology we all carry around with us could be useful.

For example, places like Times Square and Hollywood Boulevard are full of people hustling for tips from tourists who, unlike Jermaine, go to the trouble of dressing up as comic book character. Most of them don’t cause too much trouble. But occasionally the Hulk Smash urge takes over. For example, from the L.A. Times in 2007:

The buzz on Hollywood Boulevard on Friday was over the Chewbacca who police say crossed over to the dark side in front of hundreds of tourists at Grauman’s Chinese Theatre.

The incident — witnessed by Superman and other impersonators — is the latest clash outside the landmark cinema between visitors and performers dressed as movie and cartoon characters. They collect tips from tourists who pose for pictures and watch them perform in front of the theater, where generations of stars have placed their footprints in concrete.

Tourists have complained that some costumed characters turn abusive when they refuse to pay them to pose for pictures. Two years ago, actors dressed as superhero Mr. Incredible, Elmo the Muppet and the dark-hooded character from the movie “Scream” were arrested for aggressive begging. More recently, an actor portraying slasher movie favorite Freddie Krueger was taken into custody for allegedly stabbing another man, although no charges were filed.

It would seem like that when you let these folks out of the jug after doing their time you could make them wear a GPS ankle bracelet for a couple of years with the warning that they have to stay away from tourist sites. If they go hang out in Times Square, they get a call from their parole officer.

Perhaps fittingly, the idea of the ankle monitor came from Spider-Man. From Comic Book Resources:

A New Mexico district court judge, Jack Love, read a late 70s Spider-Man comic strip in the newspaper, where the villain Kingpin was tracking Spider-Man via an electronic tracking bracelet on Spider-Man’s wrist. Love theorized that such a device would work in real life, as well. He struck an arrangement with a computer salesman to develop the devices, which were introduced in New Mexico in 1983.