La Times practically shrieked in joy with a featured story at how California has become less American, less law-abiding and more Mexican, er diverse. The arrogance of liberals knows no bounds.

Behold the Tuesday headline, right below the Times banner: 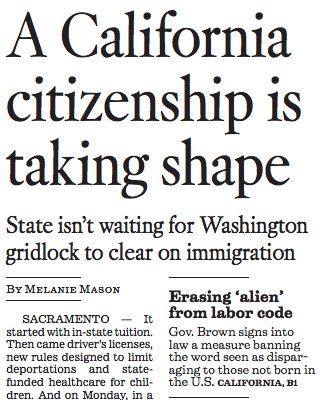 It’s not exactly a good time to be doing cartwheels about California’s rebellion against law and sovereignty when another murder victim of an undeported illegal alien criminal has been in the news. This time the victim is a 64-year-old woman veteran of the Air Force, Marilyn Pharis, who was bludgeoned to death in her own home in Santa Maria.

On July 1, 32-year-old Kate Steinle was shot dead by a five-times-deported Mexican as she strolled with her father on a well visited pier in San Francisco. The crime received nation-wide news coverage and prompted a Senate hearing a few weeks later.

Nevertheless, the preventable murders of Californians are just so much road kill to la Times, which apparently believes that liberals’ open-borders utopia is worth all the death and suffering. Citizenship, law and sovereignty are just so 20th century.

Interestingly, the online title of the celebratory article was slightly less confrontational than the print version. I think. Note that energized Democrats have more goodies planned for foreign moochers.

It started with in-state tuition. Then came driver’s licenses, new rules designed to limit deportations and state-funded healthcare for children. And on Monday, in a gesture heavy with symbolism, came a new law to erase the word “alien” from California’s labor code.

Together, these piecemeal measures have taken on a significance greater than their individual parts — a fundamental shift in the relationship between California and its residents who live in the country illegally. The various benefits, rights and protections add up to something experts liken to a kind of California citizenship.

The changes have occurred with relatively little political rancor, which is all the more remarkable given the heated national debate about illegal immigration that has been inflamed by GOP presidential candidate Donald Trump.

“We’ve passed the Rubicon here,” said Mike Madrid, a Republican strategist. “This is not an academic debate on the U.S. Senate floor about legal and illegal and how high you want to build the wall…. [The state] doesn’t have the luxury of being ideological…. The undocumented are not going anywhere.”

Democratic lawmakers and immigration activists, with diminishing opposition from the GOP, continue to seek new laws and protections. These measures include cracking down on employers withholding pay from low-wage workers and expanding state-subsidized healthcare to adult immigrants without papers.

These new initiatives face obstacles, but backers say such hurdles center on the hefty price tags of the programs, not political fallout from the immigration debate.

California officials have been spurred into action in part by the lack of action in Washington to overhaul the nation’s immigration system. The stall in Congress has motivated advocates to push for changes in state laws. But they acknowledge that their victories are limited without national reform.

“The reality is, despite the bills that we’ve done, there are up to 3 million undocumented immigrants that still live in the shadows,” said Assemblyman Luis Alejo (D-Watsonville), chairman of the Latino Legislative Caucus. “Their legal status as immigrants does not change — only Congress can do that.”

Karthick Ramakrishnan, a public policy professor at UC Riverside, calls what’s emerging “the California package”: an array of policies that touch on nearly every aspect of immigrant life, from healthcare to higher education to protection from federal immigration enforcement.

Other states have adopted components of the package; Connecticut, for example, offers in-state tuition and driver’s licenses, and passed legislation known as the Trust Act to help limit deportations before California did.

But Ramakrishnan said California is unique in how comprehensive its offerings are.

Most of these laws were passed after 2000, and became especially plentiful after 2012, when President Obama took executive action that shielded from deportation people who were brought to the country illegally.

California was one of the first states to authorize driver’s licenses for those affected by Obama’s order; two years later, Gov. Jerry Brown signed a law enabling all immigrants in the U.S. illegally to seek licenses. The same year, the state expanded in-state tuition for more students in the country illegally and allowed people without legal status to obtain law and other professional licenses.

There have been symbolic wins too, such as a law last year to repeal vestiges of Proposition 187. The initiative, which overwhelmingly passed in 1994, denied immigrants in the country illegally access to public services; it had been mostly overturned by the courts. And on Monday, Brown signed a measure striking the word “alien” — seen as derogatory to those not born in the U.S. — from the state’s labor laws.

Still, advocates at times have fallen short. They made the expansion of healthcare coverage a signature issue in recent years, but the estimated price tag of such proposals runs in the hundreds of millions of dollars. So far, they’ve notched a narrower victory — $40 million in the most recent state budget to provide Medi-Cal coverage to children younger than 19 regardless of legal status.

Brown also vetoed a measure in 2013 that would have allowed legal immigrant residents to serve on juries, saying in his veto message that “jury service, like voting, is quintessentially a prerogative and responsibility of citizenship.”

A handful of Democrats — mostly from swing or politically conservative districts — had also opposed that measure.

Brown has appointed a number of noncitizens in the country legally to state agencies and departments, according to his office.

Other policies have run into criticism. The death last month of Kathryn Steinle, who authorities say was shot by a Mexican national who had previously been deported several times, thrust San Francisco’s “sanctuary city” policy into the national political debate. The policy limits local law enforcement’s cooperation with U.S. immigration officials.

San Francisco adopted sanctuary city status in 1989, and other major cities in California, including Los Angeles and San Diego, have followed suit. Under a statewide law passed in 2013, local law enforcement officials are prohibited from detaining immigrants for longer than necessary on minor offenses so that they can be turned over to federal officials for possible deportation.

Steinle’s killing prompted swift criticism of the city’s more permissive policy from GOP presidential candidates and U.S. Sen. Dianne Feinstein, a Democrat from San Francisco. Steinle’s parents testified in an emotional hearing on Capitol Hill and Republican lawmakers in Congress have pushed several measures to clamp down on sanctuary cities.

In California, however, the backlash has been notably more muted. One Republican state senator, Jeff Stone of Temecula, has said he intends to introduce a bill that would require cities and counties to fully cooperate with federal immigration authorities. But none of his GOP colleagues in Sacramento has so far chimed in with calls for action.

The shift in tone is also evident in Republicans’ voting records. Some of the earlier immigration measures —benefits such as in-state tuition and financial aid for higher education, for example — were generally opposed by Republicans, as were measures intended to limit deportations and enforcement.

A handful of GOP members voted in 2013 in favor of the driver’s license law; several more backed the measure allowing professional licenses the next year.

This year, a sizable number of Republicans have voted for a proposal that would grant work permits to farmworkers living in the country illegally. GOP state Sen. Andy Vidak of Hanford authored a resolution calling for federal immigration reform that included a path to citizenship.

“There is a growing recognition now that we’re a state of rich diversity. We’re a state of immigrants and that’s a positive,” said Assemblywoman Kristin Olsen (R-Modesto), the GOP leader of the Assembly.

Olsen, who said the national debate around illegal immigration has taken on a tone that’s “too strident, too harsh,” said her party is increasingly open to state action in the absence of immigration reform at the national level.

Nevertheless, she said some of California’s new laws have gone too far — particularly those that dip into the state’s coffers, like expanding college financial aid or healthcare to those who are in the country illegally.

The shift in the GOP’s tone is coming in part because of demographic realities — Latinos have surpassed whites as the largest ethnic group in the state, and California’s sizable Asian population also has large numbers of immigrants.

Recent polls by the USC Dornsife/Los Angeles Times and the Public Policy Institute of California have found broad support for a path to citizenship for those in the country illegally.

Even those who advocate for stricter immigration laws acknowledge their side has won few victories in recent years.

“Citizens are out of the loop on these immigration bills,” said Joe Guzzardi, spokesman for the group Californians for Population Stability. “I question whether or not any of them would have passed on the ballot, especially the ones dealing with outlays of taxpayer money.”