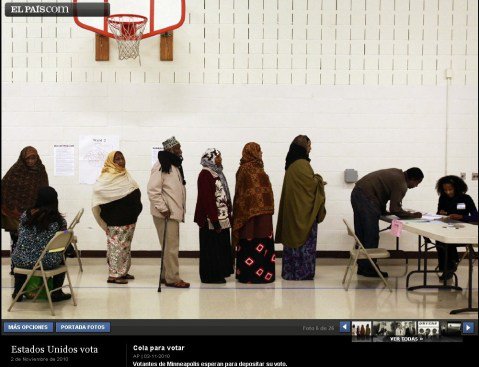 Refugees And “Refugees”: Either Category Will Burden Us Forever. Plus, They'll Vote.

The word within quotes in my title above is a nod to the high incidence of fraud among refugee and asylum cases.  Much more needs to be written about that.

Meanwhile, there’s a notion out there that refugees—and “refugees”—are just here temporarily, that they’ll return home as soon as things settle down back there.  In this picture, permanent resettlement in a land away from one’s origin is the exception, not the rule.

“Refugee resettlement is a strategy that’s been the last resort,” said Stacie Blake of the U.S. Committee for Refugees and Immigrants. “The first option for anyone who’s in the situation of being a refugee is that whatever it is that’s causing you to flee would be resolved and you can go home. If that is not possible, we might look for a solution in the country where the refugee fled.”

That assertion by Stacie Blake earned a snort of derision when I ran it by Ann Corcoran, proprietress of the indispensable Refugee Resettlement Watch blog.  She added, "The UN is currently sending some refugees back to Somalia from camps in Kenya, yet we're still taking in thousands of Somali 'refugees' per year."

Notably, the foundational document of the international refuge regime has a different take than the they’re-refugees-only-as-long-as-things-are-hopping-at-home story summarized above.  Here’s what it says in Article 34 of the United Nations’ Convention (1951) and Protocol (1967) Relating to the Status of Refugees:

And the significance of naturalization is made evident in the opening paragraph of an article, New White House Campaign Will Encourage Legal Immigrants to Become Citizens, by Julia Preston in today's New York Times:

White House officials announced the start of a nationwide campaign on Thursday to encourage legal immigrants to become American citizens, which could add millions of voters to the electorate in time for the presidential election next year.

In most cases, lawful permanent residents (LPRs) can naturalize after being resident in the U.S. for five years.  And those with official "refugee" status are lawful residents, eligible to take paid employment upon arrival and required to obtain a "green card" (equivalent to being an LPR) one year later.

Further, as Ann Corcoran wrote on March 5, 2015 (Hurry! Get those New Americans their citizenship before September 2016 [government grants fueling the process]), refugees who have been here the requisite six years are among those targeted to naturalize, since some of your taxes are going to refugee contractors—e.g. International Rescue Committee and World Relief Corporation of National Association of Evangelicals (see here; scroll down)—to help them push their cohorts of LPRs to become voting citizens.

If you've any doubts regarding what to think about all this, recall how the late, great—and sorely missed—Terry Anderson opened his radio show every Sunday night for nearly ten years: "Stupid people of America: If you ain't mad, you ain't paying attention!"