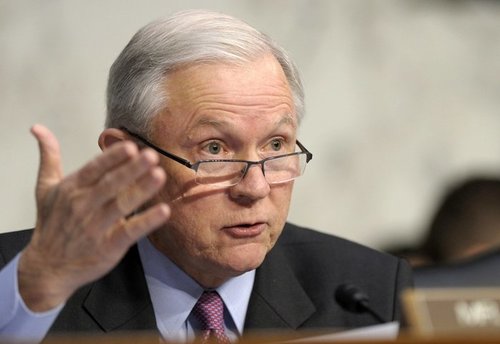 On Wednesday, Senator Sessions spoke at length concerning what should be done about the horrendous mess in the Middle East. In particular, he said America face militant Islam realistically and understand that Muslims so inclined find plenty of assurance in the Koran that expansion by the sword is religious behavior. Sessions believes success against their aggression may take decades. He cited Cold War diplomat George Kennan and his “containment” strategy regarding the Soviet Union as a model. (Interestingly, Kennan noticed fairly early that excessive diverse immigration was a dangerous influence that could easily turn out badly for America.)

Jihadist Islam, according to Sessions, is a long-term threat to freedom that requires our serious attention. It’s good that he is thinking in terms of containment, because Islam cannot be fixed, it can only be quarantined, and that should include ending Muslim immigration for the safety of Americans.

The following statement from Sessions’ office is an edited version of the Senate speech.

“This deal – this ‘executive agreement’ – between President Obama and Iran’s leaders (not the Congress, not in the form of a treaty that’s binding over time, but a personal executive agreement) is the predictable end of a poorly-initiated negotiation.  I will vote against it.  It is not the right policy for the United States.  I am not going to attempt to re-state all of the arguments my colleagues have made against it today.

Iran’s drive to acquire nuclear weapons arises out of the Islamic extremism in the Middle East, and I would like to take the opportunity today to discuss that extremism and how we can confront it.

We need to discuss a long term strategy, Republicans and Democrats and our Western world allies, our free world allies, how we are going to deal with, over a long period of time, the problems of extremism in the Middle East. It is clear that we are seeing a resurgence of militant Islam.  This strain of Islam seeks to advance a theological and political approach to the world.  It seeks to unify faith and politics and believes such advances are essential to honor Allah.  This strain that has been in Islam for years that advocates conversion by the sword, in fact, finds much support in the Koran.  Most Muslims are truly people of peace, are faithful people in their daily activities.  But there is a sizable minority that oftentimes seeks dominance and achieves dominance, that finds a basis in the Koran for their violent Jihad against those they describe as infidels.  They see the hedonism in parts of the West, and other actions that occur in the Western world, for example, as totally destructive and contrary to what they believe is right, and they don’t accommodate to it.

So we are thus seeing a spasm, an eruption of aggression that has occurred before over the centuries, but it is certainly reaching a high pitch today, exacerbated by the technology of weapons of mass destruction, nuclear weapons, and other dangerous weapons.  The nature of this eruption is quite complex.  It is different in every region, country, and area and different among sects, tribes and traditions, and is shaped by economic conditions, security conditions, and tribal and human conditions in the various regions of the Middle East, spanning from Afghanistan, Pakistan on to Syria, to Yemen, to Egypt, to Morocco, and into Africa today.  This crisis, occasioned by Iran’s religious determination to obtain a nuclear weapon, is just one aspect – though a huge one – that has arisen as a result of this extremism.  The world is surely presented with a deep and complex problem that requires the most wise and consistent response over years.  And, the surge of terrorism will not end quickly.  We are most likely talking about decades.

Our response to such violent actions cannot be based on short-term political, partisan factors.

President Bush had, in his mind, a vision for a good future for the Middle East.  He believed all people wanted peace, freedom, education and prosperity.  He reached too far, perhaps, and made some tactical errors as he sought to advance his vision.  But, by 2011, after much bloodshed and cost, Iraq had achieved stability of a kind and some real political progress.  A democratically elected government had been formed and stability and even prosperity seemed possible.  Our new president, however, was not impressed and did not share the Bush vision.  President Obama did not consider the Bush vision as part of an established, bipartisan, long-term strategy of the United States.  He thus felt little loyalty to that vision and he started to execute his different vision in the Middle East.

I was with some British Parliamentarians recently and noted that someone had said that President Obama’s withdrawal from Iraq in 2011 was the greatest error of the 21st century to date.  One of the experienced Brits responded, ‘Well, some say it was the disbanding of the Iraqi army after the victory in Iraq.’  So, when even great nations act, things seldom go smoothly.  And failure of great nations to act often has its own consequences.  Enemies do not desire to be defeated.  They do not desire to be killed.  Enemies adjust to whatever tactics are used against them.

So, to the point, colleagues and friends.  Military actions are fraught with danger.  Inaction is fraught with danger.  The world is very complex.  The very best minds, who know well the specific countries at risk and at turmoil, must be involved when plans are made and evaluated.  Long-term – even very long-term – consequences of action and inaction must be considered at the beginning.  The world is a dicey place, indeed.

On my heart and mind today is the concern that this spasm of Islamic extremism and terrorism will be with us at least for 40 years, perhaps more.  Experts have told us this.  Dr. Pollack, at the Brookings Institute,  testified before the Senate Armed Services Committee.  I asked him, ‘Dr. Pollack, you said that these problems are long in the making and will be long in solving.  Just briefly, would you say, with the spasm of extremism and violence and sectarianism in the Middle East, that we have a long term policy problem — I  mean 30, 50 60 years — to try to be a positive force in bringing some stability to that region, and history tells us those states of violence tend to cool off but often take decades to cool off.’  And I remember it very distinctly.  I got an answer that you don’t often get.  He looked up at me and he said ‘Yes.  That’s what I’m saying.’

And, this terrorism, unfortunately, is often focused on the United States who the extremists see as ‘the great Satan.’  This represents a direct threat to the security and prosperity of our nation and our people.

Thus, we should seek to act in a statesmanlike manner, considering the threats and the interests of the people we serve in the near and long term.  That means making wise decisions that may not be popular at a given time.

In the late 1940s, the famous George Kenan, a State Department official, penned a Cold War policy paper that became known as the basis of the non-communist world’s ‘containment’ doctrine.  It became the bi-partisan policy of the United States as we confronted the enormous threat of atheistic, totalitarian communism that sought to dominate the entire world.  While there were vigorous, and usually healthy, debates over tactics and techniques and procedures, there was consistent and bi-partisan support for the overarching strategy that communism could not be allowed to dominate ever-growing portions of the world.  It must be contained.  The nation, our nation, indeed the entire free world, became unified in that goal.  This strategy held until the blessed collapse of the Soviet Union.

Once again we face a totalitarian threat to the free world.  This time it’s from ideological and apocalyptic Islam.  Like communism, its goals are incompatible with the laws and freedoms we see as central to our liberty and prosperity.  There can be no compromise with this form of radical Islam.  It just will not merge with and accommodate with the freedom that we believe is essential in the Western world.  Theologically-based Sharia law fundamentally conflicts with our magnificent constitutional order that separates church and state, and that considers free debate and dissent the way to a better world.

Thus, this threat must be successfully resisted.  To do so obviously means that we, and our allies, have to agree on an effective strategy—not just the tactics of Iran today, ISIS tomorrow, Egypt the next day, Yemen the next day.  Seven years into his presidency, President Obama has failed in this regard.  We must accept that fact.  The result is instability, violence, and displaced persons.  Indeed, one wise European leader told me that the immigration crisis, as a result of refugees from the Middle East, is the greatest European challenge since World War II.  What a dramatic statement.

The question of Iran and its sponsorship of terrorism and its acquisition of nuclear weapons is a dramatic and extremely important development.  That’s why it has engaged our attention so significantly.

But, the Middle East presents even broader and more complex issues.  Was the world, and the people of Syria, better off with Assad – bad as he was – in power?  Was Libya doing better under Gaddafi than it is now?  One European official said a million people, mostly Libyans, are on the North African shore seeking to enter Europe or the United States.  Is Egypt, under the military, a more secure and a more positive force for good in Egypt and the Middle East than it was under the elected Muslim Brotherhood and other extreme parties?  How would our discussions and actions have been different if our nation had established a sound, long-term policy to guide our discrete actions?

Our involvement in each of those situations and others was, it seems to me, far too ad hoc – far too reactive to a certain event.  Our actions have not been consistent and predictable.  They have not advanced a unified strategy.  They have not been a part of a coherent strategy designed to reduce tensions and strife, to reduce our direct involvement in the region.  Our policies have not resulted in a containment and reduction of terrorism and extremism.   They have not resulted in an improvement of conditions for the people of those countries or the security of Americans.

Statesmanship, as Henry Kissinger says, requires wisdom, insight, and the willingness of officials to understand the complexity of the choices the nation faces and then to provide leadership to the American people that produces the support for those policies that may not seem clear or positive at the time they are announced, because the world is a complex place.

Let’s get together, colleagues, and commit to developing a wise and sound strategy – outside the rush of daily politics – using the great insights and talents that are available to us.  This nation is fortunate to have persons of loyalty, experience, knowledge, and sound judgment who can help us.  In its basic form, a good strategy must be simple and understandable to high officials and to everyday American people.  This is not an impossible task.  A good strategy will provide guidance and produce consistency in policy over the long run.  Importantly, it will reduce the adverse impacts of politics on foreign policy.  The American people will respond positively.

I pledge to do my part in this effort.  We have developed strategies before and we can do it again.”