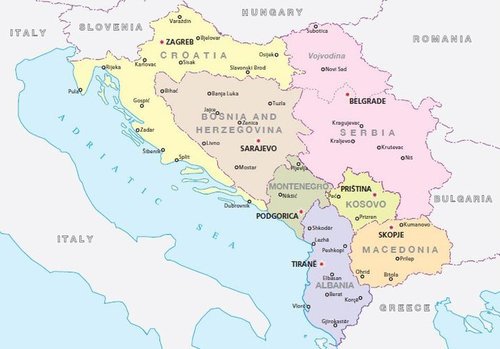 "I haven’t finished Ann Coulter’s ‘Adios, America: The Left’s Plan to Turn Our Country into a Third World Hellhole,’  but definitely recommend that you read it too!  She takes on LEGAL immigration!"

The thing about Refugee Resettlement is that it's not only legal, the government is bringing the refugees in with your tax dollars—which they will continue to consume for the rest of their lives.

1. The number one resettlement state in America is Texas (primer Part I)

And one more, not in the roundup:Invasion of Europe continues unabated as thousands come through the Western Balkans.

These aren't Croats, Slovenes,  or Macedonians coming through—these are the same black and Muslim refugees coming in on boats. Ann quotes and comments on a UN press release that says

As migrants and refugees – many of whom originate from refugee-producing countries such as Syria, Afghanistan, Iraq, Eritrea, and Somalia [mostly Muslim countries by the way—ed]– course across mountain paths and train tracks in order to pierce through the Western Balkans’ borders, they remain dangerously vulnerable to violence, abuse and accidents. According to UNHCR, many have been also moving through the region irregularly with the help of smugglers, only adding to the dangers to which they are exposed.

Well, yes, the whole thing is stupidly dangerous for the "refugees"—many of whom are risking not only their lives, but those of their children--but it really increases the dangers to the rest of us.