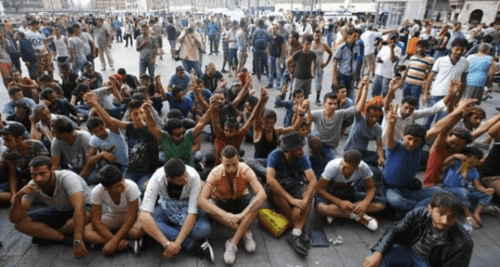 Refugee Resettlement Watch On Getting A Muslim Immigration Moratorium

In the wake of the Paris atrocity Refugee Resettlement Watch got straight to the point this morning: Angry about Paris? Time for a moratorium on Muslim migration to America? Start with cutting the funds for it!

We all know why Europe and France specifically are in the horrible place they are in now (being invaded and attacked from within) and it is because they have long “welcomed” Islamic Shariah-loving migrants to live among them.

So how do we get that MORATORIUM?

You can get it by starting with the Muslim migration occurring through the Refugee Admissions Program between now and December 11th when Congress must vote on the funding for the program for 2016.

...the No Borders agitators...are busy just this week praising Senators Lindsey Graham and Patrick Leahy who will be seeking to put a billion dollars into the funding package coming up in early December for MORE Syrian refugees!

I was pleasantly surprised to see that since I last visited the matter a month ago in Refugee Blocking Bill H.R.3314 Gains 3 More Cosponsors – But Trey Gowdy Dodges Holding Hearings On Crisis Congressman Babin’s Bill has gained 24 sponsors.

Representative Michael McCaul who is House Homeland Security Chairman has introduced H.R 3573: Refugee Resettlement Oversight and Security Act of 2015 which unlike Babin’s does not mandate an immediate temporary freeze but does require an annual joint resolution of Congress setting the number of refugees who may be admitted in that fiscal year.

McCaul’s Bill has 22 cosponsors including Babin

***Update*** How could I forget—the powerful Chairman of the Senate Judiciary Committee, Senator Charles Grassley, has already called for a halt to funding for the program!

Both these Bills should gain some sponsors now the evidence of who these Syrian refugees actually are has been so bloodily proven. And a rescheduled hearing by Gowdy’s committee on the threat is imperative.

Leftists contacted the music artist, intro is now muted. "Video is full of lies" he agreed. He's French and the following day 128 civilians were murdered by Islamists in Pars.