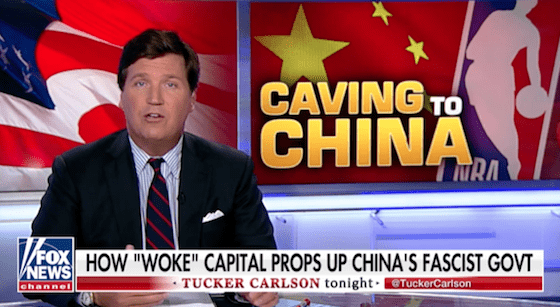 Professional basketball is now a global business worth billions of dollars, and the Chinese population of 1.4 billion consumers is very desirable. Chilling on traditional American free speech principles in order to enter that market is an agreeable deal for NBA executives, we are learning.

It’s sad to see the NBA crumble under the big money offered by the Red Chinese. Basketball is the only sport I enjoy watching, and I used to attend Warriors games here in northern California before tickets required a bank loan.

Remember when the global marketplace was promoted as being wholly beneficial for everyone? It’s easy to believe if you forget about culture.

The position of the Beijing communists is not hard to see. President Trump has smacked them around pretty well, unlike his predecessors, and the Chinese aim now is to smack back.

In the current global struggle, Red China would like to embarrass the United States in any way it can, and humbling the sport invented in Springfield Massachusetts by erasing the free speech connected with it works for them. 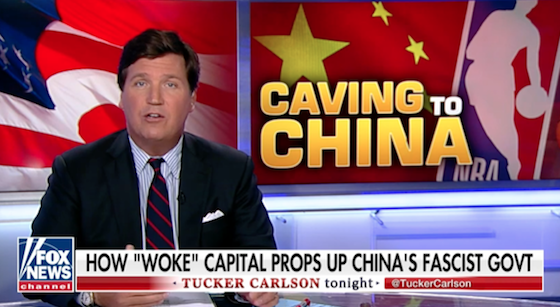 As Tucker Carlson remarked during his Tuesday show, the purposeful enrichment of China by American business has not created democratic institutions there. As he summed up, “Instead of exporting American freedoms to China, our ruling class instead imported Chinese authoritarianism here.”

TUCKER CARLSON: Good evening and welcome to Tucker Carlson Tonight. We live, as you may have noticed, in the age of woke capital. They’re not just selling products, they are selling something more than that, and you see it everywhere.

You see it in every movie, every commercial, every press release from the diversity division of your local HR department. The message is always the same. Companies aren’t just soulless profit seekers, they are more than that. They have values. They have principles. They care. They care probably more than you do.

Once upon a time, corporate America flattered its customers. Now, they dare you to be as virtuous as they are. But is that real? Are they actually virtuous? Or is all of this a cynical pose? We will let you decide.

Consider this, last Friday, Daryl Morey, the general manager of the Houston Rockets basketball team, sent what seemed like a noncontroversial tweet. He wrote this, quote, “Fight for freedom. Stand with Hong Kong.” End quote. That’s it.

Now China, as you may have seen on television, is now trying to crush Hong Kong and it’s not hard to pick a side. China, it is rarely noted, but it is true, is a racist ethno-state that bans dissent and murders its political opponents. You think every American would stand with Hong Kong without even thinking about it. But not the NBA.

The NBA is on China’s side. So Morey was forced to delete his tweet. He may in fact lose his job over this. The NBA issued a statement making it clear that under no circumstance do they support Hong Kong or human freedom.

Today, basketball Commissioner Adam Silver emerged to clarify. He repeated the refrain of every person who opposes free speech. Sure, you’re free to say what you think, but you aren’t safe from the consequences.

NBA COMMISSIONER ADAM SILVER: The long-held values of the NBA are to support freedom of expression. Daryl Morey as the general manager of the Houston Rockets enjoys that right as one of our employees. What I also tried to suggest is I understand that there are consequences from that exercise, in essence, his freedom of speech, and, you know, we will have to live with those consequences.

CARLSON: Oh. So, it’s that hard to say that we support freedom against the fascist government of China. Apparently, it is. Steve Kerr is the coach of the Golden State Warriors. On the question of American politics, Kerr, you may have noticed, has no problem speaking his mind. He embraces the hard left social policy that suddenly is so fashionable among rich people. He doesn’t hesitate, for example, to demand the stricter gun laws for the rest of us.

In the words of one fawning media outlet — and there are many — Kerr speaks truth to power. All right. So what truth was Steve Kerr ready to speak to China? Well, none, it turns out. Not a single truth to the government of China.

Choosing between freedom and fascism turns out to be a really confusing choice. Who knows what the right answer is? As Kerr pointed out, it’s really above his pay grade.

WARRIORS COACH STEVE KERR: It’s a really bizarre international story, and a lot of us don’t know what to make of it, so this is something I’m reading about just like everybody is, but I am not going to comment further.

CARLSON: Yes, not going to comment further. It’s a bizarre international story. In other words, Steve Kerr is a phony. He is brave when the crowds applaud, but when money is at stake, he shuts up and obeys like the cowardly little corporate stooge that he is. It is hard to imagine how a man like that can look himself in the mirror at night, and yet he is not alone — hardly.

There are countless Steve Kerr’s in corporate America, all of them happy to sell out their country and lick the boots of their Chinese masters for pay. Activision Blizzard — that’s a major video game company — just banned a top player from one of its games because he gave an interview supporting the demonstrations in Hong Kong.

Just last year, right outside of Washington, the hotel company Marriott fired one of its employees. Why? For liking a tweet that recognized Taiwan as a country. That’s it. That tweet offended China. So Marriott did the bidding of the fascists and fired him. That actually happened.

This is common, by the way. In Hollywood, pandering to China is so common, so flagrant that the show “South Park” produced an entire episode mocking it:

CARTOON MAN: For this movie to really make money, we need to make sure it clears the Chinese sensors, you know, we want those Chinese viewers.

CARTOON MAN: It’s okay. There’s plenty of other things to talk about with your story. How about what kind of things were you into when you were younger?

CARTOON MAN: Okay — no, no, no, no, that’s definitely off limits. Winnie the Pooh is illegal in China because some Chinese students said he looked like the Chinese president.

CARLSON: It may be ridiculous, but South Park was banned in China after the episode you just saw. You’ve got to respect its creators for making the episode anyway. And Comedy Central for airing it.

Most companies in America, we are sad to say, would never do that. Why? You know why? China has 1.4 billion people. Companies want access to that market. If it’s a choice between supporting the United States, our country and our people or getting rich from China, it is no contest from any company.

For decades, neoliberals assured us that it was our duty to embrace free trade with China, as the rest of us sat passively by, they allowed China to steal our technologies, snatch up our properties in our cities, driving up rents, decreasing the rates of homeownership and destroying millions and millions of course of our manufacturing jobs.

Making a communist country vastly rich would be worth it, they assured us because China inevitably — these things are always inevitable — would become much freer and more democratic as well. That was inexorable, because capitalism always leads to democracy.

Remember that? They would nod as they said it. They were lying. It turned out to be completely false. Instead of exporting American freedoms to China, our ruling class instead imported Chinese authoritarianism here.

Thirty years later, ordinary Americans are poor, wages haven’t moved, and all of us are less free. But China and our neoliberal elite are a lot richer. It turns out that fascism, whatever you think of it is pretty good for business. That ought to worry you.