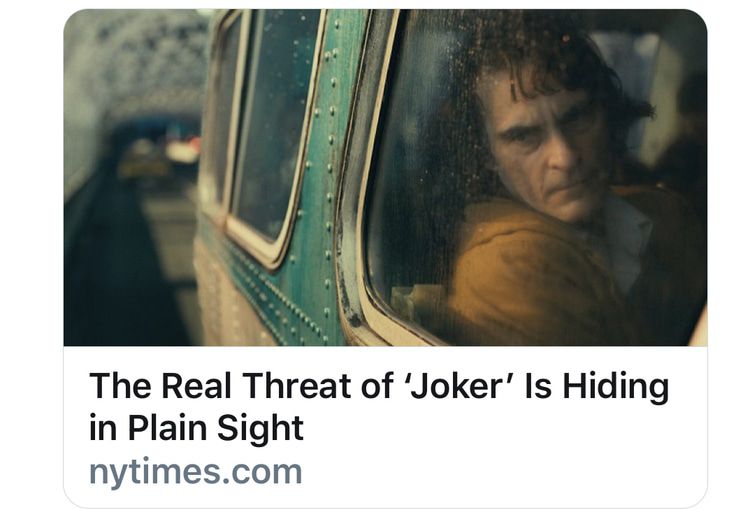 NYT: "Joker" Is What Happens "When White Supremacy Is Left Unchecked"

From the New York Times':

The Real Threat of ‘Joker’ Is Hiding in Plain Sight

What the film wants to say — about mental illness or class divisions in society — is not as interesting as what it accidentally says about whiteness.

New York Times critics keep trying to come up with arguments about why Joker is NOT interesting.

This article contains spoilers for “Joker.”

Before “Joker” opened last weekend, much was being made of how its tale of a murderous villain echoed news stories of mass shooters and incel threats, and how the film might encourage unbalanced viewers to commit acts of violence. As it turned out, it mainly inspired audiences to open their wallets for the biggest October opening ever.

What about the lunatic who early Saturday morning beat to death four sleeping homeless guys at the extremely Jokerish corner of Bowery and East Broadway in Manhattan’s Chinatown? This 24-year-old maniac had been arrested 14 times but was still out on the street again, kind of like The Joker always gets acquitted for reason of insanity.

Despite the immense anticipation in the press that white males were going to run amok in response to the movie, nobody seems to have asked whether this 24-year-old maniac was influenced in some way by the movie that had just opened after a $120 million marketing campaign.

Oh, because the killer is a black Dominican immigrant. So, never mind …

I don’t understand the assumption that only white males are interested in Batman universe movies. These are immensely valuable properties because huge numbers of people show up to see them, which suggests they have broad appeal across racial lines.

… Still, what struck me most is that what the film wants to say — about mental illness or class divisions in American society — is not as interesting as what it accidentally says about whiteness. For it is essentially a depiction of what happens when white supremacy is left unchecked. It shows the delusions that many white men have about their place in society and the brutality that can result when that place is denied.

The fact that the Joker is a white man is central to the film’s plot. A black man in Gotham City (really, New York) in 1981 suffering from the same mysterious mental illnesses as Fleck would be homeless and invisible. He wouldn’t be turned into a public figure who could incite an entire city to rise up against the wealthy. Black men dealing with Fleck’s conditions are often cast aside by society, ending up on the streets or in jail, as studies have shown.

And though Fleck says he often feels invisible, had he been black, he truly would have been — except, of course, when he came into contact with the police. They’d be sure to see him.

Thus, Joker has gotten berserk negative reviews, noteworthy for their incoherence and anger at the film’s evenhanded politics.

My impression is that the screenwriters put in a lot of effort to make their allegorical allusions balanced. I don’t know if that makes it a better movie, but its centrist politics appears to be outraging the critics. Like a lot of the hate jargon of the Great Awokening, “whiteness” spikes upward in 2014 and then soars in 2015.

Generally speaking, unless you are a polar explorer, an interior decorator, or an albino, use of the term “whiteness” is prima facie evidence of racial animus.