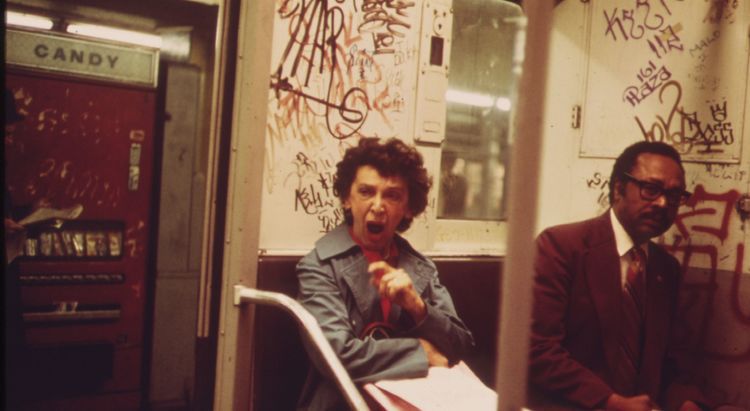 The Good Old Days In NYC: Real Life 80s Were Worse Than JOKER

Much of the elite rage at the popular movie Joker is owing to it showing, in its depiction of life in a comic book New York City in 1981, Youths of Color committing a violent crime. That’s all just a stereotype!

In my book research am often told charming anecdotes about the “good old days” of NYC, before the NYPD got their act together. For instance, I did not know about this gem from 1985:

A festive fund-raising walkathon through Manhattan for the March of Dimes ended in turmoil yesterday as packs of roving youths attacked and harassed scores of marchers in and around Central Park, snatching neck chains, purses and other property.

Seven people were hurt, 17 youths were arrested and 52 robberies and larcenies were reported, 41 of them in the park between 2 and 4:30 P.M. as 26,000 marchers ended an 18-mile hike that raised hundreds of thousands of dollars for the Greater New York March of Dimes.

Much of the violence occurred near the park’s band shell just below the 72d Street transverse, where scores of arriving marchers fell prey to youths who swarmed upon them. Harried police officers chased and caught some suspects but were overwhelmed by the number of youths and incidents.

”Two 19-year-old girls were walking along when a herd of about 100 youths – one of the roving bands – came running by,” said Lieut. James Keneally of the Central Park Precinct. ”They got swept up. Their chains were gone, their clothes were ripped. They looked like they had been through a tornado.”

He said that on a usual weekend night the precinct receives only one or two reports of robberies.

Tom Grommell, a 29-year-old insurance broker from Brooklyn who was one of the marchers, said he and others were made to run a virtual gantlet of young thugs, who inspected each passer-by.

”The gentleman behind me had one of these hand-held puppets and was wearing a gold chain,” he added. ”Some of them grabbed the chain. Others went after the puppet. This guy tried to resist and they beat him until they got his chain.”

A civilian police employee who took part in the march and witnessed some of the robberies told a detective friend that she had been horrified.

”She said it just turned out to be a rob-athon,” said Det. Evans Andre of the Midtown North Precinct.”It was terribly unfortunate because it had been a very productive and pleasant day,” said Nancy L. Isenberger, a spokesman for the March of Dimes Birth Defects Foundation.

She said that to her knowledge none of the marchers were responsible for the robberies. The police, too, said they appeared to be the work of others. Twelve of the 17 youths were arrested in the park, and of them, 11 were from Brooklyn and 1 was from the Bronx, a precinct officer said.

The day’s events recalled the violence and anarchy that followed a Diana Ross concert in Central Park on July 23, 1983, when 80 people were arrested and 171 people filed complaints of beatings, robberies and other attacks that occurred in Columbus Circle and the Times Square area and left 41 people injured, 16 of whom required hospital treatment.

But the rules given to me by New Yorkers of my age were amazingly restrictive geographically by current standards — basically, stick to the central spine of Manhattan (e.g., Fifth Avenue and Broadway). For example, in the Greenwich Village area, the west side of Second Avenue was okay, but don’t cross Second Avenue! There were legendary Alphabet Avenues on the Lower East Side that few people I talked to had ever walked. There be dragons…

We went once to Brooklyn, but only to the River Cafe right under the Brooklyn Bridge.

It sounds like Moskos might be writing a book about how crime was brought so far down in NYC, which is an important topic.