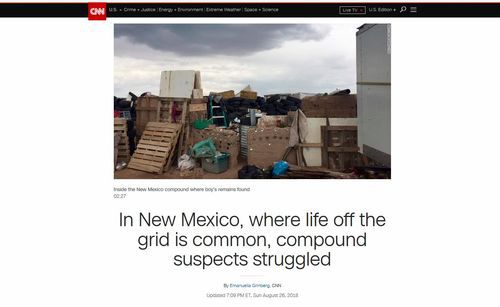 In New Mexico, where life off the grid is common, compound suspects struggled

Taos County, New Mexico (CNN) … It had been two weeks since law enforcement raided lot 78 in Costilla Meadows, a rural subdivision in Amalia, New Mexico, where homes are off the grid and you can see your nearest neighbor miles over the dry grassland. Police found 11 malnourished children there, shoeless and in tattered clothes, and arrested five adults. Days later, they found the remains of the 3-year-old boy they were searching for. …

Residents of this sparsely populated region of northern Taos County encountered members of the black Muslim family in familiar places: the gas station, the Family Dollar, the hardware store, the body shop. Little about the family members stood out, they said, apart from their dirty clothes and their skin color, a rarity in this area primarily populated by Hispanos — descendants of Spaniards who settled in the Southwest centuries ago.

Otherwise, those who met them said they seemed friendly. A resident recalled how one of the men tenderly wiped the nose of a crying child. What little the residents knew about the compound didn’t raise eyebrows in an area where many people live “in unconventional ways,” as the judge in the case has said.

Individuals from society’s periphery have long sought refuge in this part of the state, where cheap land far from the nearest power line or shopping center is easy to find. The region’s history of welcoming outsiders has contributed to cross-cultural exchanges and a tolerant attitude that locals consider points of pride. Many are quick to distance the state’s countercultural vibe from the compound, where the adults are accused of training the children to commit mass shootings. But they also fear that the publicity around a case infused with allegations of child abuse, faith healing and terrorism might contribute to a rise in racism and Islamophobia. …

Living off the grid is not for the faint of heart, he said. … But plenty of people — white folks, especially — do it, he said. …

It appears to have been a life that the family on the compound struggled with. Authorities say a break in the case came when a member of the compound sent a note to a friend saying they were starving. Defense lawyers have argued that their clients are being judged based on their skin color instead of their lifestyle, and that if were white Christians, more people would be defending their First and Second Amendment rights. …

While the defendants have been granted bond, they face a long list of restrictions that have hindered their release, said Morten’s lawyer, Aleksandar Kostich. They must remain in Taos County under house arrest and GPS monitoring — an extraordinary set of circumstances for defendants who don’t have jobs or financial means to satisfy the requirements, Kostich said.

For a different perspective than CNN’s, from the Atlanta Journal-Constitution:

Updated 8 hours ago
By Steve Burns, The Atlanta Journal-Constitution

Two people in a New Mexico compound in which children were allegedly trained to carry out mass shootings had Grady Memorial Hospital as a target, according to prosecutors.

Interviews with some of the 11 children removed from the compound this month said Jany Leveille and partner Siraj Ibn Wahhaj, who have metro Atlanta connections, intended to confront “corrupt” institutions or individuals, according to a document filed Friday in Taos County, N.M., and obtained by AJC.com.

“A specific ‘corrupt’ institution named by one of the children was Grady Hospital,” according to the document.

Leveille expressed her displeasure with Grady “due to treatment she and her mother received there,”the document said. …

The couple also planned to “shoot or otherwise attack” people they failed to persuade with their “message,” the documents show. …

In Friday’s court filing, prosecutors in New Mexico are seeking to have them and three other suspects in the case held without bond.

All are still in custody.