The company that created Baxter, the $25,000 robot designed to do manufacturing jobs 24/7, has come up with a new machine that is smaller and capable of finer movements. So while Baxter can pack boxes and other simple movements, Sawyer’s more delicate touch allows it to perform some aspects of electronics manufacturing, for example. 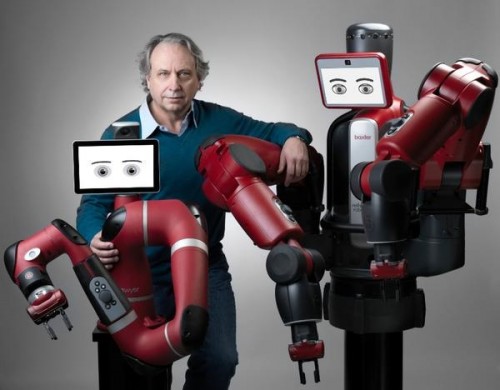 The price of the new robot is reported to be $29,000 and its expected lifetime is 30,000 hours, which puts the cost at around a buck an hour plus a little electricity. What manufacturer wouldn’t snap up a bunch of the units to replace humans who take coffee breaks and expect a living wage?

A major talking point of robot builders is that the machines “help” humans rather than replace them in an integrated workplace. A recent Financial Times article about Sawyer was titled, “Robots rub shoulders with human buddies.” How reassuring.

Interestingly, that article noted, “Last year Volkswagen said it plans to use robots to cope with a shortage of new workers caused by retiring baby boomers.” One reason cited by proponents of increased immigration in this country is the idea of a labor shortage caused by the retirement of millions of the boomer generation. But employers are fine with using robots which are cheaper and more convenient.

But clearly human workers are rapidly becoming obsolete in manufacturing, which is obvious when you see modern automobile assembly lines that are entirely robotic.

Given the workplace revolution that is happening right now, America certainly doesn’t need to import millions of immigrants for future jobs that won’t exist. Oxford University researchers estimated in a 2013 report (“The Future of Employment”) that “about 47 percent of total US employment is at risk” to be replaced by smart machines.

The horrible Gang of Eight Senate bill mandated doubling legal immigration forever, and open-borders proponents would love a “compromise” of hugely increased immigration now and promised enforcement sometime at an undefined later date. But initiating a huge demographic change based on a wrong idea about labor needs would be a bad mistake because it would massively increase an angry unemployed underclass, among other social and economic problems.

There’s a new robot in town.

Weighing in at 41.9 lbs and standing 3.3 feet tall, the one-armed Sawyer is smaller and more flexible than Rethink’s only other robot, the double-armed Baxter, which debuted in 2012. While Baxter has helped companies do heavy duty work like loading boxes, Sawyer was created to automate more detailed, smaller tasks, like testing circuit boards and machine tending — jobs that have traditionally proven too intricate for industrial robots.

“[Baxter] gave us a tremendous base of companies that were thinking like us. We have a vision, idea and experience, but we don’t necessarily have all the answers,’” Rethink CMO Jim Lawton says of Sawyer’s development, which began in late 2013. “It’s like taking one step across the river. You can’t get there in one step, so you need to build commercially viable products as stepping stones. Eventually, you get to the other side of the river.”

Rethink’s customers have already used both robots — though Sawyer only in field tests — to perform low-level factory jobs, positions that are often menial, dangerous or undesirable. The machines are also relatively cheap: Sawyer will start at $29,000 when it’s introduced more widely this fall, while Baxter starts at $25,000; similar robots can cost several times more. The robots’ signature touch is digital “faces” that double as easy-to-use interfaces, allowing companies to get Sawyer and Baxter up-and-running within hours or days.

Together, Sawyer and Baxter are just two of the many robots fueling fears automation and other technologies are taking humans’ jobs. Rethink is used to the criticism: factory labor has long been a politically charged topic, and the seven-year-old startup has often been in the spotlight thanks to its big-name investors like Bezos Expeditions and Charles River Ventures. Rethink’s most recent funding round in January raised $26.6 million. That’s considered a significant investment in the robotics industry, which is expected to grow 12% globally every year, according to the International Federation of Robotics.

Still, Rethink Robotics argues that its robots will only supplement their human counterparts, not outmode them. “Companies who are buying robots are filling in the tasks they can’t get people to stay and do,” says co-founder Rodney Brooks. “They’re using the people they have more positively by using their intelligence.”

Global manufacturing company Jabil, which uses thousands of robots including Sawyer and Baxter, agrees that robots will support instead of replace manufacturing workers. After all, the manufacturing field is in global decline as emerging and advanced economies shift toward high-skill jobs, according to a McKinsey Global Institute report. In the U.S., for example, the share of jobs in manufacturing fell from 25% in 1950 to about 9% in 2013.

“The trend that’s across the entire manufacturing continuum is a demographic shift that’s making it more and more difficult to attract the kind of low-cost labor that we’ve been able to do in the past, and to keep wages at the levels they’re at,” says John Dulchinos, VP of global automation at Jabil. “Robots by themselves aren’t the answer, but robots are a piece of the equation.”