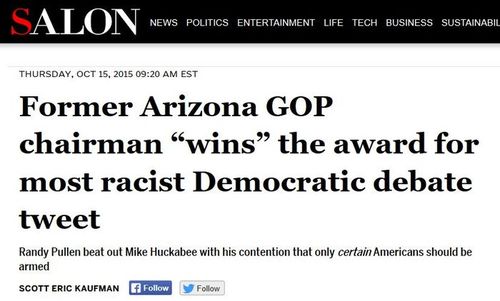 Randy Pullen Was Right—America Doesn't Have A Gun Problem, It Has A "Blacks With Guns" Problem

Having roughed up Mike Huckabee for a "racist" tweet during the Democratic presidential debate, although what Huckabee wrote is true (Koreans like eating dogs), Salon says another Republican is even worse.

Randy Pullen, former chief of Arizon'a GOP, tweeted that the best gun control policy would be taking guns from blacks, given that they commit the most murders.

Yes black lives matter. The best way to end the slaughter of young black men is to take guns away from blacks as they are the main killers.

As the Arizona Republic’s EJ Montini noted, Pullen is technically correct that the majority of black homicide victims are killed by other black people, it’s also true that the majority of white homicide victims are killed by other white people. It would be best, however, not to hold your breath waiting for Pullen to call for disarming white America.

No, he won't. When it to comes gang- or drug-inspired murders, the scourge of the inner city, blacks and Hispanics commit most of them ... against each other. They commit more than 90 percent of violent crime.

So taking guns from whites won't appreciably lower the level of murderous violence in America. Nor would taking guns from law-abiding blacks — say, members of the National Rifle Association.

But taking guns from inner-city blacks would.