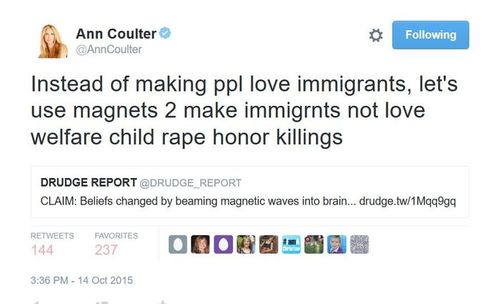 How Will We Stop The Nativists? Magnets.

As we've all heard at this point, scientists claim they can change people's opinions on issues like belief in God and opposition to immigration with the use of magnets. I wouldn't be surprised if they make this mandatory. (I don't even know if I'm joking anymore.)

In a deeper sense, this is one of those left wing snarky clickbait stories that actually reveals deeper conservative truths. The way this procedure worked is by disabling the parts of the brain that respond to threats, crisis, and danger. Many people on the Alt Right (especially racial realists) have understood for years that a person's political ideology is deeply informed by their genetic makeup [Study on twins suggests our political beliefs may be hard-wired, by Rich Morin, Pew Research Center, December 9, 2013] This alone is a devastating blow to the "blank slate" premise of liberalism (classical or otherwise).

But it's also worth looking the specifics of the study. Scientists here didn't make a person more "pro-immigration." They removed the person's ability to be offended or threatened by an immigrant who openly declared his hostility to their country.

To address their levels of prejudice, participants were asked to read two essays - one critical and one positive - written by an immigrant from Latin America about the US.

They were also 28.5 per cent more positive in their feelings toward an immigrant who criticised their country.

The investigators additionally found that the magnetic stimulation had the greatest effect on reactions to the critical author in the essay test.

'We think that hearing criticisms of your group's values, perhaps especially from a person you perceive as an outsider, is processed as an ideological sort of threat,' said Dr Izuma.

'One way to respond to such threats is to 'double down' on your group values, increasing your investment in them, and reacting more negatively to the critic,' he continued.

'When we disrupted the brain region that usually helps detect and respond to threats, we saw a less negative, less ideologically motivated reaction to the critical author and his opinions.'

[Could your views on God and immigration by changed by using MAGNETS? Brain stimulation can alter beliefs, study claims, by Victoria Wollaston, Daily Mail, October 14, 2015]

This inadvertently reveals one of the core principles of modern leftism—the refusal to believe threats are to be taken seriously, a belief that is best sustained when one lives in an ideological bubble. I've noticed plenty of leftists snarking about this study, openly joking about when they can open the re-education camps.

But I would interpret this study another way—modern leftism is a form of brain damage. In order not to see the harmful consequences of mass immigration, you literally have to give yourself a magnetic lobotomy.