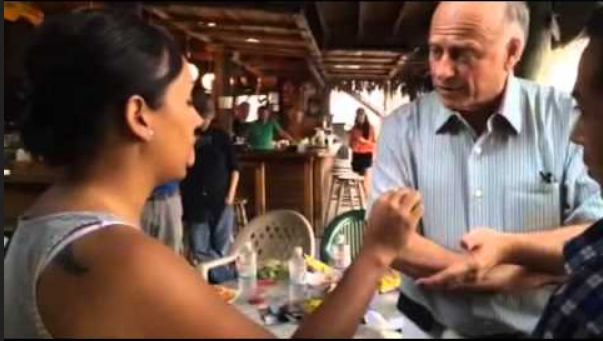 The thing to note about the video below is that Rand Paul can be seen running away to avoid a confrontation, as noted by the people who posted this video, Klejdys on the right, and Salon on the left .

Rand Paul’s stunning cowardice: Wants to be president but fears a “dreamer”

While low-rent congressman Steve King debated a dreamer, Paul dropped his burger and ran. Not ready for prime time!

Here's the video: some awful young deportable illegal comes up to Steve King and offers him her DACA papers to tear up.

Steve King was willing to speak truth to power:

The two then entered a lengthy back-and-forth with both talking over each other repeatedly. In the exchange, King defended his 2013 controversial comments about undocumented immigrants having “calves the size of cantaloupes.”

“I spoke of drug smugglers,” he told Andiola. “Now you’re not here to tell me you’re one of them, are you?”

Andiola said she came to the country from Mexico with her mother when she was 11 and has lived in the U.S. for 17 years. She said her mother was escaping an abusive relationship, and they already had family in the U.S., so they came across the border.

Her mom had applied to get into the U.S. legally but was denied, she said.

“And so it’s OK then to violate the law?” King answered back.

“I’m really sorry that you come from a lawless country,” he later added. “I hope that you can have a happy life. But please, do not erode the rule of law in America.”

I used the expression "truth to power" when talking about King's willingness to engage with a young illegal.(The expression is Anita Hill's coinage, referring to the lies she told about Clarence Thomas.)

My favorite misuse of this phrase was when Valerie Jarrett said from inside the White House, where she was Senior Adviser to the President, that the Administration was ""going to speak truth to power" against Fox News.

In the Steve King case, you would think that a deportable illegal young person would be less powerful than a United States Congressman, but she isn't.