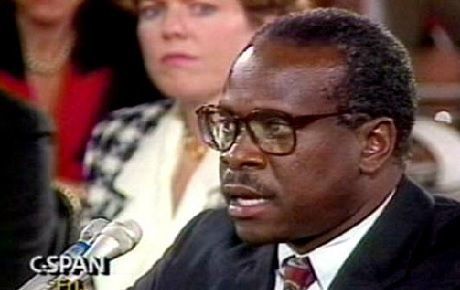 Anita Hill All Over Again

Looking back, 1991-1995 seems like one of those eras (such as the late 1960s or 1917-1920) when America was undergoing a national nervous breakdown. Nothing symbolizes the free-floating hysteria of the era better than the vast brouhaha that erupted in October 1991 over Anita Hill's charges that Clarence Thomas ... uh ... well, it's hard to remember precisely what it was that so obsessed the nation at the time, but the essence of her complaint was that he had implied, in so many words, that he was a man and she was a woman.

This led to The Year of the Woman (as the media declared the 1992 election year to be) that Bill and Hillary Clinton surfed into the White House. Which was pretty funny, considering what ol' Bill had been up to down in Arkansas, but nobody got the joke at the time. (I must say, though, that I did write an article in December 1992, "A Specter Is Haunting the Clinton Presidency," forecasting that the incoming Clinton Administration would be put in mortal peril by a sexual harassment charge made by an Arkansas state employee. But nobody would publish it.)

If only Clarence had married Anita instead of that white woman, all this might have been avoided!

At the time, I thought the craziness of the era was related to the recently completed war, just as WWI unleashed a lot of nuttiness. But, in retrospect, it seems more directly to be CNN's fault.

Before Desert Storm, so few people watched CNN that the Ricola cough drop company was able to use its tiny ad budget to buy a huge number of spots on CNN for its commercial of three Swissmen in lederhosen on top of an alp blowing giant Swiss horns. By the time the war was over, however, all of America not only had heard of Ricola cough drops but were heartily sick of the thought of them.

The war in Jan-Feb 1991 alerted people to the fact that there was this cable channel that broadcast news 24 hours per day. People started glancing at the TV news all day long. Of course, once the war was over, there really wasn't anything all that important to fill the vast 24 hour news hole, but they had to put something on, so why not testimony about various scandals? It was pretty close to free. And the public assumed that because it was on TV all the time, it had to be important.

The Golden Age of Cable News lasted from Anita Hill to the OJ Simpson trial in 1995, after which people started to realize that they were wasting their time.