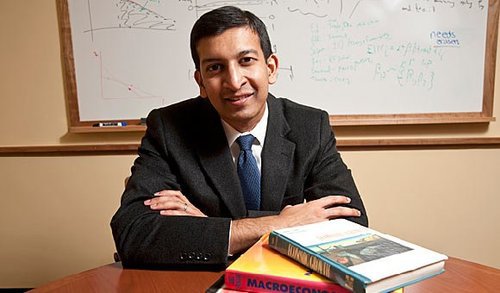 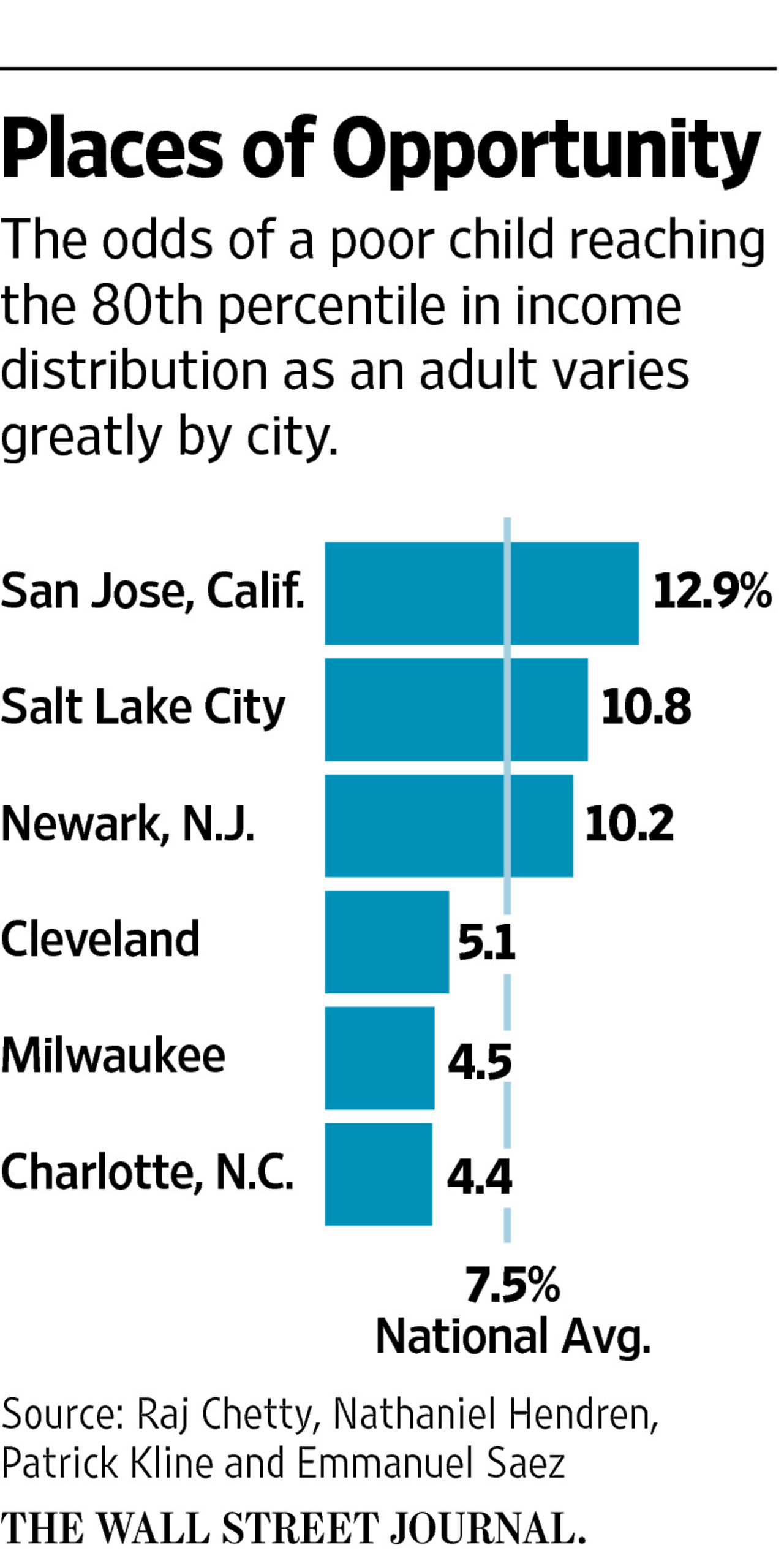 CAMBRIDGE, Mass.—In a presidential campaign where candidates from both parties are blaming globalization for a shrinking middle class, a 36-year-old India-born economist has a different explanation: Bad neighborhoods and bad teachers rob poor children of the chance to climb into the middle class.

His solution? Help the children and their families move to better neighborhoods.

What makes Harvard University’s Raj Chetty notable isn’t just his views, but his reach. He has advised Republican and Democrats alike, including former Florida Gov. Jeb Bush, former Secretary of State Hillary Clinton and the Obama White House. In a political year marked by anger and strong partisanship, his research could help smooth some of the hard edges of the income-inequality debate running through the 2016 presidential campaign.

His research finds that upward mobility depends on government policies, a position common among Democrats, as well as on neighborhood churches and two-parent families, as Republicans contend.

Policy advisers say they expect to roll out proposals bearing his imprint as the campaign unfolds. Mrs. Clinton is examining his research into housing vouchers as she crafts domestic policies. Mr. Bush is figuring out how to strengthen neighborhoods as a way to boost mobility. The White House has drawn on his work in setting housing policy.

That makes Mr. Chetty one of the few people affecting both sides in the presidential debate. He brings to the task formidable credentials: Harvard PhD at age 23; university tenure at 27; and a MacArthur “genius grant” at 33, the same age he won the John Bates Clark medal for best American economist under the age of 40. He says he was drawn to mobility as a subject, in part, because of what he saw as the vast differences in opportunity between the U.S. and his native India, which he left at age nine.

“He’s the closest thing I have ever seen to a real live Mr. Spock, half Vulcan, half human,” said Harvard economist Lawrence Katz, a former Clinton administration economist, who has known Mr. Chetty since he was a Harvard undergraduate. “He knows where to look to find the right data and what to do to answer the most important questions with it. But unlike many technical economists, he’s concerned with real people and the disadvantaged.”

Responds Mr. Chetty: “I consider that a compliment.” He says he won’t register to vote because he thinks that could bias his “laboratory science” approach to economic research.

Mr. Chetty and the economists he works with tackle problems that seem intractable, and offer hopeful prescriptions. Consider economic inequality—the income spread between rich, middle-class and poor. Mr. Chetty addresses the issue indirectly. He examines income mobility, which he defines as the ability to rise from the lowest 20th percentile of income distribution to the top 80th percentile in one generation. Climbing that ladder is more important than ever, he says, because the distance between the economic classes is greater than in the past

By analyzing tax records of families in 741 geographic districts, he pinpoints hotbeds of opportunity. Poorer children in Salt Lake City, for example, are twice as likely to reach the top fifth in income as those in Atlanta, though personal income in the cities is about the same.

High-mobility metro areas have a combination of greater economic and racial integration, better schools and a smaller fraction of single-parent families than lower-mobility areas. Integration is lagging in Atlanta, he said. “The strongest predictors of upward mobility are measures of family structure,” Mr. Chetty said.

His proposal: move poor children to high-mobility communities and remove the impediments to mobility in poor-performing neighborhoods. He now is working with the Obama administration on ways to encourage landlords in higher-opportunity neighborhoods to take in poor families by paying landlords more or guaranteeing rent payment.

But despite all the publicity it gets, his Equality of Opportunity project has been exposed to virtually no in-depth criticism as of yet, other than my long Taki’s column where I went through his highest and lowest mobility counties one by one.

The good news is that many of his county-level findings make excellent sense. There are good reasons why Sioux County, Iowa saw the highest growth in income for children whose families were in the bottom half of the national income distribution in 1996-2000 to what the now young adults are making in 2011-2012 (Sioux County benefited from a large farm boom combined with a nice combination of social conservatism and strong education), while Shannon County was the worst (it’s the Pine Ridge reservation, which is probably the most consistently tragic place in the country).

In other words, Chetty’s rankings pass some basic reality checks with flying colors: Pine Ridge is notoriously horrible, while when I read up on Sioux County, Iowa (where, unlike Shannon County, South Dakota, there aren’t many Sioux), it appears to be about as fine a farm county as there is in the Midwest: it’s where the record price of $20,000 per acre of regular farmland was set in 2013. On the other hand, farmland prices are down from their 2013 peak, and there have been lots of eras during my lifetime, such as the 1980s, when being from a farm county wasn’t good for your income. So Chetty’s confidence that his findings from over one timespan will apply to future timespans seems overblown.

The bad news, however, is that much of Chetty’s findings are due to methodological flaws that substitute noise for actionable policy-relevant findings. Chetty claims he’s uncovering enduring patterns that we can all learn from. But as I wrote last spring:

In summary, Chetty’s data still suffers from crippling problems with:

- Regression toward the mean (especially among races) - Temporary booms and busts - Cost of living differences.

For example, in the WSJ graph above of percentage of young adults who grew up at the 20th percentile in income in the later 1990s who are now at the 80th percentile: San Jose (i.e., Silicon Valley) and Newark (the giant New Jersey suburban commuting zone popular among Wall Street employees, rather than just the inner city of Newark) benefited from vast booms in tech and Wall Street. In contrast, the greater Charlotte area, which was prospering up through 2008, has been hammered by the subsequent collapse in home-building, furniture-making, and lumbering due to the Housing Bust.

Also Silicon Valley and the New York suburbs have gotten even more expensive from the later 1990s to this current decade, and Chetty fails to adjust for the rise in the cost of housing.

It would not be impossible for Chetty to come up with methodological fixes for these obvious problems with his findings. He improved his work from 2013 to 2015, suggesting he has internal motivation to do better. Maybe he’ll fix his faults between 2015 and 2017? But right now he’s under very little external pressure to improve since nobody else seems to have noticed what he’s done wrong.

For example, here’s another piece from the WSJ about how everybody who is anybody is totally wowed by Chetty’s study and intends to use it to social engineer America:

In early June, 50 officials from across the government crammed into the offices of the Council of Economic Advisers to hear a lecture by Harvard economist Raj Chetty on economic mobility, twice the usual turnout for visiting economists. Earlier in the day, he conferred one-on-one with Treasury Secretary Jack Lew. The day before, he met with several other cabinet secretaries.

… But he is especially popular at the White House. President Barack Obama has met at least twice with him personally and singled out his work on education and teacher testing in the 2012 State of the Union address.

Mr. Chetty is advising the Department of Housing and Urban Development how to remake its housing voucher program, which the poor use to pay for rent.

Through studies with other authors, Mr. Chetty has found that a) communities vary greatly in their ability to help the poor to rise into the middle class; b) children who move from low-mobility neighborhoods to high-mobility ones have big gains in lifetime earnings; c) the younger the kid who moves, the greater the impact; and d) the outcome is different with older teenagers. If anything, the dislocation of moving often sets them back

HUD now is in the midst of a pilot project in Dallas that encourages families to move to higher-mobility parts of the Dallas metropolitan area – more racially integrated places where there are better schools and fewer one-parent families. Voucher payments are higher for such neighborhoods to cover higher rents. HUD officials want to expand the program to other metropolitan areas where it could include as many as 400,000 people.

But how many quantitatively-oriented Americans have time to look at Chetty’s data about what are the best counties to raise your children in when there are important baseball statistics to analyze?