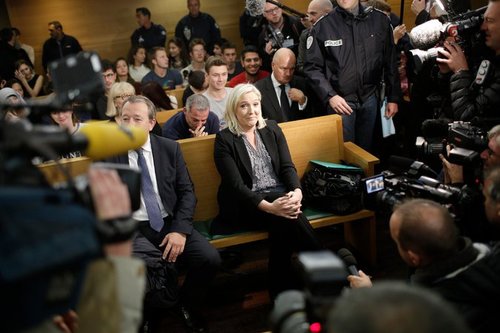 LYON, France — With pugnacity and self-assurance, the French far-right leader Marine Le Pen defended herself in a courtroom on Tuesday against charges of inciting religious hatred against Muslims, provoking cheers of “France for the French” from supporters in the courthouse halls afterward.

Drawing on French anxiety over the migrant surge in the east, an electoral campaign in which Ms. Le Pen’s National Front is seen as having momentum, and her own charisma, she turned what was meant as an accusatory stage into a full-throated platform for her views.

The context was unusual, but the hard line taken by the populist leader was not: France’s Muslim immigrants are an alien force threatening French values.

Human rights lawyers — France’s court proceedings allow their intervention — tried to challenge her, but Ms. Le Pen, a skillful lawyer herself, batted them away. …

But it took the lifting of her parliamentary immunity by the European Parliament in 2013 for the case to move forward, spurred on by the human rights groups. …

When the case finally came to trial on Tuesday — a final judgment is expected on Dec. 15, and Ms. Le Pen could face a fine of over $50,000 and up to a year in prison — it did so at an ideal moment for the political leader.

Okay, but isn’t the idea that the frontrunner in the first round of Presidential voting in 2017 is on trial and facing a year’s imprisonment for a speech somewhat eye-opening to Americans? Does nobody notice the irony in “human rights” lawyers and groups trying to stifle freedom of speech in the land of Voltaire and Liberte, Egalite, et Fraternity?

Or has the term “human rights” simply become, like “civil rights,” a who?-whom? term to depict whose side you are on, with no relation anymore to general principles?