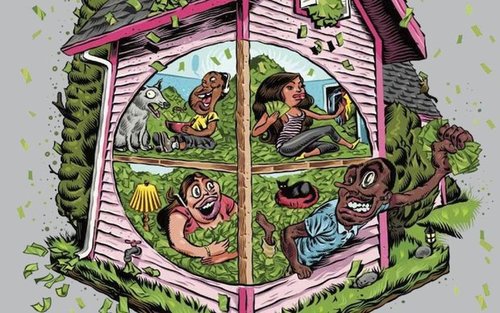 Diversity and the Housing Bubble/Bust: Yet More Data

I like to collect academic studies documenting the interaction of America’s love affair with Diversity and Immigration with the Housing Bubble/Bust of the 2000s. From the The Annals of the American Academy of Political and Social Science, July 2015:

Variations in Housing Foreclosures by Race and Place, 2005–2012

This study describes the spatial and racial variations in housing foreclosure during the recent housing crisis. Using data on the 9.5 million visible foreclosures (public auctions and bank repossessions) occurring between 2005 and 2012, we show that the timing and depth of the foreclosure crisis differed considerably across regions and metropolitan areas, with those located in the Mountain and Pacific West regions experiencing the highest foreclosure risks. The crisis was patterned sharply along racial/ethnic lines, with metros and neighborhoods with large black and Latino populations—as well as racially mixed neighborhoods—having high rates of foreclosure. Our analysis also highlights the particular vulnerability of Latino households, who not only had very high individual risk of foreclosures but tended to reside in areas hit hardest by the crisis. The race-stratified geographic patterns of foreclosure revealed here are substantially more complicated than a narrative that depicts only the unique disadvantage of black households during the crisis, and likely reflect some level of specific targeting of minority populations and neighborhoods by predatory and subprime lenders.

I haven’t been able to find a copy of this for less than $30, so I haven’t read more than the abstract, but it appears to fit in closely with virtually every detailed study published in the last half year, along with my arguments in 2007-2008.

But what percentage, say, of 2016 Presidential candidates are aware of this connection?

Update: thanks to readers, here are some quotes from the paper:

The popular story of the crisis often includes narratives of foreclosures in white western suburbs (Economist 2011) and minority-heavy central cities in the Midwest (Haughney and Roberts 2009). … while black concentrations were mostly unrelated to average foreclosure rates in cities and suburbs, they were strongly conditioned by Hispanic shares. In both cities and suburbs, foreclosure rates were considerably higher in areas with larger Hispanic populations, with the highest rates being observed in suburban areas that were more than one-fifth Hispanic. …

Thus, despite media accounts of the crisis primarily targeting suburban white and urban minority neighborhoods, the descriptive patterns in table 3 sug- gest that white neighborhoods were mostly shielded from the worst of the fore- closure crisis, while black, racially mixed, and especially Hispanic neighborhoods were hit especially hard.3

Specifically, in all divisions, the lowest average foreclosure rates are observed in all-white or Asian neighbor- hoods. by contrast, racially mixed and solidly minority neighborhoods—e.g., mostly black and all-minority areas—consistently recorded some of the highest rates. Foreclosure rates among black-white and white-mixed neighborhoods in the Mountain division were in excess of one in four homes over the 2005 to 2012 period. the highest average rates were observed in Southern Atlantic integrated neighborhoods where one foreclosure for every three homes was logged. In all but one division where there were a sufficient number of block groups, mostly black neighborhoods had the highest or second-highest average foreclosure rate, followed by black-white neighborhoods, which ranked second-highest in four divisions. Mostly Hispanic and Hispanic-white neighborhoods also recorded exceptionally high rates of foreclosure in several divisions, including the Mountain west and South. A central point to take away from this analysis is that in each region, neighborhoods containing sizable shares of African American and Latino populations tended to be the most heavily burdened by foreclosures in almost every division of the country.

Basically, this 2015 statistical analysis comes up with a picture of the Bubble/Bust that looks an awful lot like the one I depicted in my 2008 short story “Unreal Estate” about two white brothers-in-law speculating on houses in the high desert exurbs of north Los Angeles County: the big losses tended to be in integrated neighborhoods where people were trying to buy their way out of diversity-related problems elsewhere. It turned out, though, as Buckaroo Banzai liked to say, “Wherever you go, there you are.”