Radio-Host Mark Levin Is A Great Resource For Immigration Patriots

July 3rd's letter from "A Suburban Illinois Reader" conveyed enthusiasm that talk-radio host Mark Levin had received some exposure at VDARE.com for his coverage of immigration.

Indeed, Levin is no flash-in-the-pan on the subject.  He talks about immigration frequently and with real understanding—far deeper than the typical slogan-dominated public conversation such as "We're a nation of immigrants" [wrong] and "The Statue of Liberty welcomes the arrival of huddled masses" [wrong]. 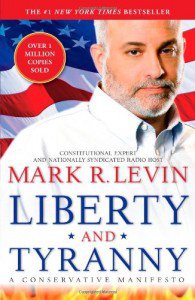 His expertise goes back at least half a decade, to the publication of his book Liberty and Tyranny (2009), which has a 28-page chapter "On Immigration."  I reviewed the book here [PDF] specifically because of that chapter, although my review addresses other themes in the book as well.

Among the sub-topics Levin addresses in his terrific chapter on immigration are these:

? The fraudulence of the concept “jobs Americans won’t do”;

? How the 1965 Hart-Celler Act started chain immigration, overthrowing the system of skills-based admissions;

? The absurdity of birthright citizenship for children of illegal aliens;

? How, starting with FDR, the immigration-saturated big-city masses led to Democrats’ electoral lock on the cities, “and, in the process, ended the traditional Republican majority in this country”;

? The concentration of poverty among the foreign-born;

? The result of a large-scale amnesty would be irreversible “because of the enormous electoral clout such a significant and largely unassimilated ethnic population would exercise”;

? The 1986 amnesty happened but the enforcement promised in the grand bargain didn’t.

If you have immigration-naive friends who are willing to read 28 pages (about 7,700 words) about this subject of largest possible national consequence, you would do well to hand them Levin's book with this chapter marked.  Or make them a copy of the immigration chapter alone.

And if any VDARE.com reader has a private communication channel with Levin, you could encourage him to create a PDF file of this chapter and make it available for free at his website.