Radio Derb Is On The Air: Nancy Pelosi's HUMCRI On The Border, Etc

The inward flood of illegal aliens continues to be the main story.  I have some sport with Nancy Pelosi’s astonishing speech to the press. 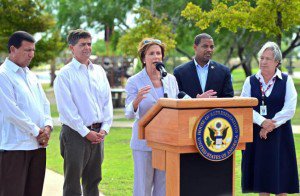 The people who write newspaper stories, politicians’ speeches, and TV newsreaders’ scripts now all have the phrase “humanitarian crisis” set up as a one-key macro. Pretty soon they’ll start abbreviating it; after all, eight syllables is a lot to have to keep repeating. There used to be a Governor of New York State who was so fond of the phrase “Brotherhood of Man and Fatherhood of God” his speechwriters just abbreviated it to BOMFOG in his scripts. Nancy Pelosi’s people could do the same thing with “humanitarian crisis,” chopping it down to HUMCRI, perhaps.

Nancy was actually down at the border this week to see the HUMCRI for herself. After visiting a facility in the Rio Grande valley where hundreds of this recent wave of Central American invaders are being held, Mrs. Pelosi spoke to the press.

Every American should watch that speech. It’s only five minutes. You can see it on YouTube:

Some record of it should be put in a time capsule and buried, so that historians of the future will be able to understand why the U.S.A. disappeared from the face of the earth in the mid-21st century.

Pelosi’s speech is, not to put too fine a point on it, five minutes of the most concentrated stupidity it has ever been my painful duty to watch.