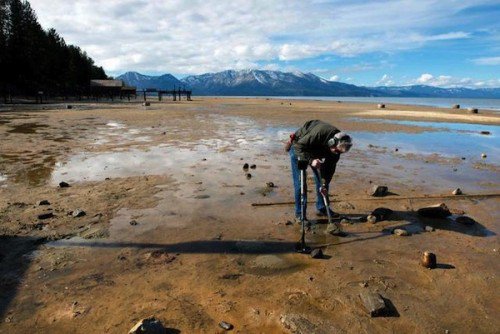 Radio Derb Is On The Air:, Drought, Trump, And The Battle Flag, Etc.

In this week’s podcast I sniff around one side-effect of the Great California Drought.

As you may have heard—on, for example, Radio Derb—they're having a nasty drought in California. The drought has, of course, absolutely nothing to do with the fact that California's population has doubled since 1970, mainly because of mass immigration. If you were to suggest that, you would be a hateful person.

The drought could generate some unfortunate side-effects. Here's one of them, from Bloomberg Business News, June 23rd, headline: Drought May Prompt Californians to Let Personal Hygiene Slide.

The idea is that with the shortage of water getting acute, residents of the Golden State are not going to wash themselves as much.

Why is this in the business news? Because people who read the business news want to know which companies will prosper and which falter. Companies like Procter & Gamble will falter if people buy fewer personal hygiene products; companies selling cleansing products that don't need water will be good buys, see? Come to Radio Derb for your stock tips! Money talks in this world, my friends.

Business considerations aside, the decline in Left Coast personal hygiene may itself have an unwanted side effect. Heading back to Paris from the wars, Napoleon wrote ahead to Josephine: "Don't wash!" The little guy was on to something. Among the stuff we wash away in our morning shower are body secretions whose odors help drive sexual interest. If these juices are not washed away, presumably Californians will be doing more coupling. That may result in a population boom, leading to further pressure on water resources … which is where we came in.

What's the moral of this story? Sheesh, I don't know. Cleanliness is next to godliness, perhaps? Or possibly: Uncontrolled mass immigration stinks.