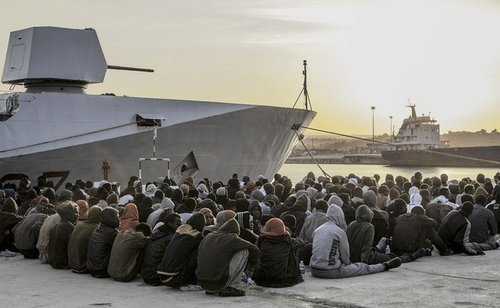 David Frum writes in The Atlantic:

Illegal migration across the Mediterranean has tripled since the overthrow of Muammar Qaddafi in 2011 opened the ports of Libya to human smuggling on an unprecedented scale. Some 50,000 migrants made the crossing to southern Europe in the first four months of 2015. Another 1,800 died at sea.

Hundreds of thousands more people are estimated to be waiting in Libya for the chance to cross into Europe. Millions more would follow if they could. The migrants come from a vast swath of Africa and the Middle East, spanning not only war-torn Syria (in the first four months of 2015, Syrians accounted for just 30 percent of those crossing the sea) but also Nigeria and the Gambia and Eritrea and Somalia and Mali. They wish to leave behind poor, unstable countries in order to seek opportunity in the wealthy lands of the European Union. It’s a dangerous gamble. But the prize is huge.

Of the 170,000 migrants who made landfall in Italy in 2014 (Italy being the most common destination for migrant boats last year), reportedly only about 5,000 have actually been deported. Sixty percent of those who sought asylum in the country last year were granted refugee status or other protections upon their first request. (Still more received such status on appeal.) Many migrants don’t wait for a hearing. They spend a few days in an overcrowded reception center, then abscond north to the stronger job markets of France, Germany, and beyond. Italian authorities are sometimes accused of conniving at this escape, so as to lessen the burden these new arrivals pose to Italian taxpayers.

The migrants who embark upon this journey are typically represented as terrorized and impoverished—as people driven (to quote Amnesty International) “to risk their lives in treacherous sea crossings in a desperate attempt to reach safety in Europe.” The demographic and economic facts complicate that story. When populations flee war or famine, they generally flee together: the elderly and the infants, women as well as men. The current migrants, however, are overwhelmingly working-age males. All of them have paid a substantial price to make the trip: it can cost upwards of $2,000 to board a smuggler’s boat, to say nothing of hundreds or even thousands of dollars to travel from home to the embarkation point in the first place. Very few of the migrants from Libya are actually Libyan nationals.