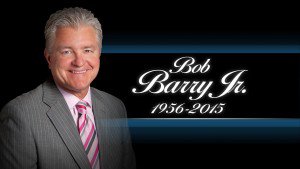 The younger Barry died in an accident in Oklahoma City  on June 20th.  While on his motorcycle in the left lane, a driver in the right lane suddenly "made an illegal U-turn in front of Barry, and Barry was thrown from the motorcycle after crashing into" the car.

Some  suspected this, but on June 24th this information was officially released:

Authorities confirmed Wednesday morning that a man, accused of causing a crash that killed local sports journalist Bob Barry Jr., had previously been deported three times.  Gustavo Castillo Gutierrez, 26, has been charged with causing an accident without a valid driver's license and drug possession on Tuesday....

On Sunday, U.S. Immigration and Customs Enforcement (ICE) placed a detainer with Oklahoma County on Gutierrez from Mexico, following his arrest on criminal charges. ICE officials confirmed that Gutierrez had been voluntarily returned to Mexico three times, twice in 2010, and once in 2013.

According to an accident report released on Wednesday, Barry took “no improper action” in the crash, meaning he was purely a victim. Authorities said Gutierrez had been distracted before the collision for an unknown reason.  Barry suffered injuries to his head, trunk (internal and external), arms and legs. Gutierrez suffered head and trunk injuries.  The collision report stated that the vehicle driven by Gutierrez was owned by someone else. Authorities: Suspect in Crash That Killed Bob Barry Jr. Previously Deported 3 Times News9.com, June 24, 2015

Even before this information was released, it was obvious that  Castillo Gutierrez fit the profile of an illegal alien. One clue is the dual surname. (See my previous article What's In a (Sur)Name?  Plenty, If You're Planning an Amnesty).

In the OKC Talk forum-style website, several PC commenters tried to quash any such talk. For example, at 12:44 a.m., June 21st, Ijbah728 said that

I've seen nothing so far that says the car driver was an illegal immigrant so I'm not sure what that point is.

Some clown on the Sooner board is irate saying the driver was an illegal alien.  Not sure what that has to do with anything.

"Not sure what that has to do with anything?"   "Not sure what the point is"?  The point is, if our government had been doing its job and keeping this guy out of the country, then Bob Barry, Jr. wouldn't have gotten killed in that accident.
The Barry family should sue the government and the employer who hired Castillo Gutierrez.