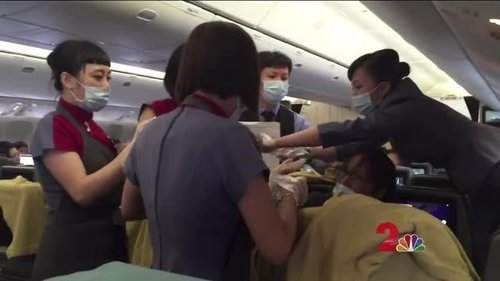 Radio Derb is On The Air: Birth Tourism In Mid-Air, Etc.

Radio Derb is on the air—go here for the full story. Sample:

I'm sure Radio Derb listeners all know about obstetric tourism — foreign women coming to the U.S.A. on tourist visas in an advanced state of pregnancy so that their baby will be born here. Under the current interpretation of the 14th Amendment, the infant is then a U.S. citizen.

Earlier this month a woman from Taiwan got her timing slightly wrong and gave birth on a plane flying from Taipei to Los Angeles. The plane was diverted to Alaska.

I can't find out what the baby's citizenship works out to be. It was a China Airlines plane, that's a Taiwanese company, so I think the plane cabin counts as Taiwanese territory. On the other hand, the birth took place six hours into the flight. It's a 12-hour flight, but the diversion to Alaska would have reduced that. It's possible the birth took place over U.S. territory, I don't know.

The mother was flown back to Taiwan; the baby is in care of relatives in the U.S.A. I'd say the odds are on him getting U.S. citizenship, after considerable lawyering. Whether that's so or not, this whole story testifies to the craziness of our laws on naturalization and citizenship.

It seems to me that a couple of days' work in Congress could sort this all out. Why doesn't it get done? I'm sure the Swiss would be willing to send people over as consultants.

Go here for the rest.