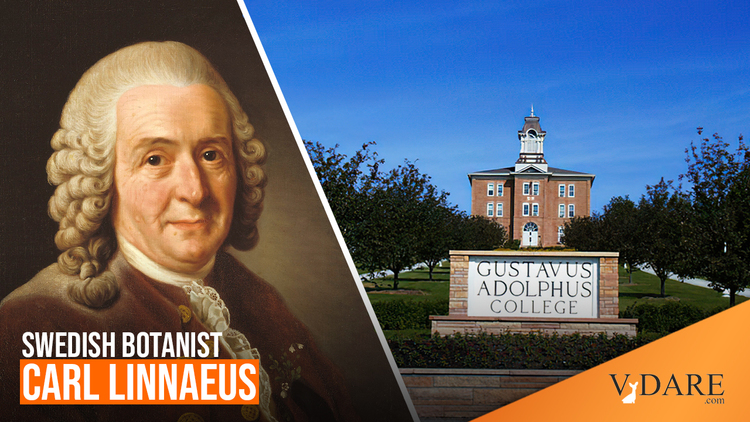 "Racist Botanist" Linnaeus Is Cancelled. How Long Left For Darwin?

A Minnesota college has renamed its arboretum that originally honored Carl Linnaeus. Recently, the 18th century Swedish botanist has been criticized for classifying races among humans based on skin color. (CORRECTS country of origin.) https://t.co/5VBaICtIWW

Racist Botanist would be a good name for a band.

A private college in Minnesota has renamed its arboretum that honored an 18th-century Swedish botanist who has been criticized for classifying humans in a way now seen as racist, school officials said Tuesday.

The popular greenspace at Gustavus Adolphus College in St. Peter, located about 70 miles (110 kilometers) south of the Twin Cities, has been known as the “Linnaeus Arboretum” since 1988. It recognized Carl Linnaeus, who popularized a system of classifying living things and divided them into the animal, plant and mineral kingdoms.

The father of modern taxonomy, Linnaeus was a scientific giant:

Philosopher Jean-Jacques Rousseau sent him the message: “Tell him I know no greater man on earth.” Johann Wolfgang von Goethe wrote: “With the exception of Shakespeare and Spinoza, I know no one among the no longer living who has influenced me more strongly.”

Yeah, but what did Rousseau and Goethe know? Back to the science denialist 21st century:

Recently, though, Linnaeus has been criticized for his 18th century book “Systema Naturae,” in which he classified four varieties of human, largely based on skin color and geography, which became the basis for scientific racism.

“Gustavus has historically sought to build an inclusive and just community,” said Scott Anderson, chairman of the college’s board of trustees. “In recent years, and especially since George Floyd’s murder, we have strengthened our efforts to pay attention to underrepresented voices and discovered how painful Linnaeus’ name and legacy are for some of our students and visitors.” …

Uhhhmm … This sounds a little Lutheran-centrist. My impression is that while it appeals to Swedish guilt to believe that numerous African-Americans are psychologically oppressed by the name and legacy of Swedish scientists, that’s not really high on the list of black problems. White executives who say things like this should be asked to quote three rap lyrics complaining about Linnaeus.

This story has been corrected to show that the chairman of the board of trustees at Gustavus Adolphus College is Scott Anderson, not Mark Anderson. It also corrects that Carl Linnaeus was Swedish, not Swiss.

Enlightenment geniuses like Linnaeus were so stupid for categorizing races based on something as skin-deep as skin. If they lived today, they’d know that what really counts is hair.