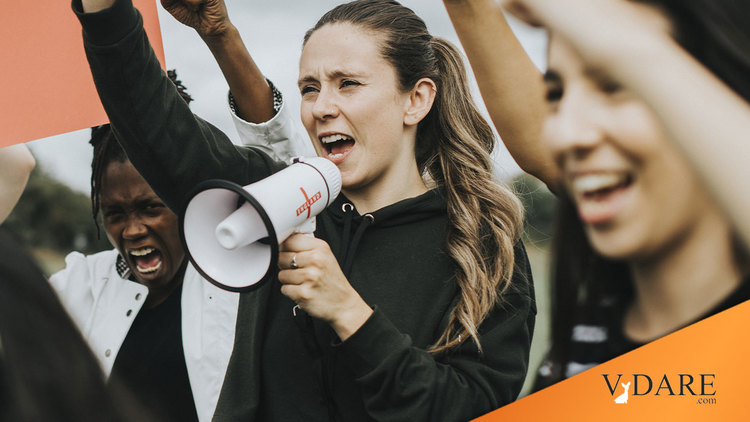 Two white men arrive in a taxi and knock down the locked front door of a house. A neighbor calls the police. A black policeman arrives and find an extremely agitated man who identifies himself, in between hurling abuse at the cop, as a resident of the house. The cop asks the man "If there is anyone else in the residence?" The man replies, "None of your business, you [bad word for black people]!"

What should the cop do?

Let's assume he goes away.

A few days later, a neighbor notices an unpleasant odor. The police get a search warrant and find the corpse of the agitated man's wife.

Would this become a massive feminist issue splashed all over CNN?

Good question. If the cop who walked away had been white, then, sure, of course it would be.

On the other hand, race usually trumps sex. Consider O.J. Simpson vs. Mark Furhman. When O.J. would beat up Nicole Simpson and she would dial 9-11, the responding cops' typical response over the years would typically be along the lines of "Hey, it's The Juice! Can we get a picture of you and us and your Heisman? Do the Heisman pose!" The one cop out of the many who came by their place on Brentwood who didn't get wrapped up in the jock-sniffing extravaganzas and who actually worried about the welfare of Mrs. Simpson was Mark Fuhrman.

As you'll recall, the only individual convicted of a felony in connection with the evenutal murder of Nicole was ... Detective Fuhrman.

As feminist prosecutor Marcia Clark found out when she tried to pack the OJ jury with women and Johnnie Cochran tried to pack it with blacks, and they ended up in a compromise packing it with black women, race trumps sex in modern American identity politics.