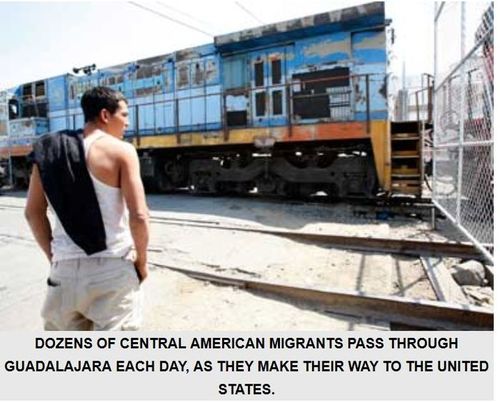 In Mexico, Guadalajara Residents Don't Want An Illegal Alien Shelter in Their Neighborhoods.

This is going on in Guadalajara,Mexico's second-largest metroplex. Notice how similar the issues are to what you might find north of the border.

From the English-language Guadalajara Reporter:

Residents of a Guadalajara neighborhood insist they are not guilty of discrimination or racism by opposing the relocation of a shelter for Central American migrants passing through the city on their way to the United States.

Did you get that? These folks are NOT, they assure you, "guilty of discrimination or racism". They just don't want Central American illegal aliens in their neighborhoods.

At a small demonstration held Sunday [August 23], around 70 neighbors of Arcos Vallarta and Jardines del Bosque urged the state government to rethink their plan to donate a property to the migrant assistance group FM4.

The homeowners point out that crime in both neighborhoods is already at alarming levels, with 13 home robberies and muggings reported this month. The increased presence of migrants will only exacerbate the situation, they argue.

I hope they aren't saying that illegal aliens bring crime. Because that would be very bad, even "Trumpian".

Neighbors say the proposed shelter...is inappropriate in a zone that includes a mix of both residential and business properties.

They are also skeptical that authorities will keep their promise to beef up surveillance in the neighborhoods. "We have been waiting 30 years for that, so I don't think it will be solved from one day to another," one resident said.

You got that right.

Residents say they have nothing against the migrants and wish them well.

Doesn't everybody? They just don't want them in their neighborhoods.

The government stepped in to offer FM4 a new property last month after the NGO closed its shelter by the railway tracks, citing security issues for its staff.

Since the charity opened the shelter in 2010, it has served as a vital stopover for migrants to rest, eat, shower and seek advice as they made their way to the United States - mostly by hopping on northbound cargo trains.

Neighbors are upset that no one from the state government bothered to seek out their opinion before they decided to donate the property for the shelter.

Members of FM4 say they have sought out leaders of the neighborhood associations to explain the importance of the shelter and how it works as well as listen to their security concerns and find solutions.

The neighbors say they haven't ruled out picketing the property when it opens. No date for an opening has been set. Anxious neighbors defiant in opposition to migrant shelter Staff, Guadalajara Reporter, Aug. 28, 2015

(Two photographs included, one with a caption reading "Dozens of Central American migrants pass through Guadalajara each day, as they make their way to the United States." The other shows a billboard opposing the placement of the "migrant shelter".)