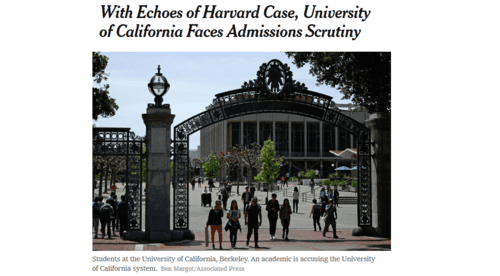 Q. Is UC Violating California Constitution Via Racial Preferences? A. It's A Secret.

An academic who studies affirmative action filed a lawsuit on Thursday against the University of California system, seeking access to a trove of records that he says could reveal whether the system defied state law by surreptitiously reintroducing race as a factor in admissions.

The lawsuit comes just two weeks after the end of a federal trial examining whether Harvard discriminates against Asian-American applicants. The California suit has clear echoes of that case, and it may signal the opening of a Pandora’s box of similar data requests at universities across the country, as opponents of race-conscious admissions seek ammunition for their cause.

“To me, this has always been a civil rights issue,” Richard Sander, the academic who is bringing the suit, said in an interview on Wednesday. “If you cut off the data, you’re saying we don’t think the public has a right to examine any of the factors determining admission or success at the university.” …

Unlike Harvard, which makes no secret of its race-conscious admissions but says it does not discriminate,

the nine undergraduate colleges that make up the University of California are prohibited by state law from even considering the race or ethnicity of applicants. California has banned affirmative action in colleges and universities since 1996.

Professor Sander, a law professor at the University of California, Los Angeles, is a prominent proponent of the contentious “mismatch” theory, which holds that students who receive substantial admissions preferences — some racial minorities, for instance, but also so-called legacy applicants and athletes — often flounder and fail, whereas they would flourish if they went to universities to which they would be better matched.

He said that he believed the damage was greatest when universities weighed race heavily over other factors and that he was not opposed to the use of slight racial preferences.

But Professor Sander said he also believed that researchers and universities were too focused on admissions data when analyzing campus diversity. They should also be looking at outcomes data, he said, which includes majors, grades, how long it took students to graduate, whether they went to graduate or professional school and even their earnings after graduation.

That is the type of data Professor Sander is seeking in his lawsuit. He said he had received several years’ worth of similar data from the University of California in 2008, and found that even though the number of black and Hispanic students admitted to Berkeley and U.C.L.A. fell after the affirmative action ban the drop was more than offset by increases in enrollment at other campuses and increases in graduation rates. More talented students applied to the top schools, he said, while others began at less elite campuses and transferred up.

For the past year, he said, the university system has blocked his public records requests for data from the past decade so he can update his studies, even though he has offered to pay for it himself.

Professor Sander said he suspected that the system, which serves hundreds of thousands of students, reacted to public pressure over declining African-American enrollment by secretly reintroducing race-conscious admissions. That led to a sharp increase in enrollment for black and Hispanic students from California high schools from 2006 to 2013, he said, and fewer Asian-American and white students.

A spokeswoman for the California system, Dianne Klein, said on Wednesday that the university system did not consider race in its admissions process. “Neither race, ethnicity nor gender factor into U.C.’s holistic admissions policy,” she said.

Ms. Klein added that to comply with the request for the type of data Professor Sander wants, the university system would have to create a customized database. Public records law does not require it to do that, she said.

Q. Is the University of California violating the California constitution?

Q. It’s not supposed to be a secret.

A. Yeah, well, we’d have to write some code to let you look at the data that would tell whether we are violating the state constitution, so, checkmate, you racist!