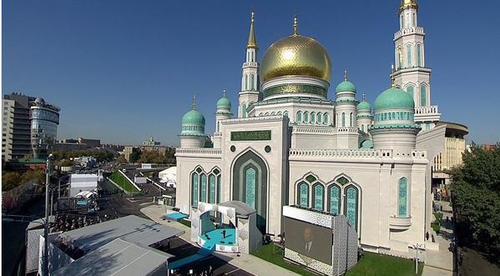 After more than decade under construction, the doors of the newly built Moscow Cathedral Mosque have finally opened in the European city with the largest Muslim population.

Not counting Istanbul. And neither France nor Russia collects data on this kind of thing so nobody really knows about a Paris v. Moscow comparison.

A recent opinion poll, published by the Levada Center, an independent agency, found that 51% of Muscovites, who are overwhelmingly Orthodox Christian, are against further mosque construction. Only 4% said they support mosque building.

But the Kremlin, usually sensitive to popular sentiments of this kind, appears to be paying little attention to the concerns.

The ceremonial opening of the Cathedral Mosque, near the city center, was overseen by Russian President Vladimir Putin.

Putin, who is stepping up military backing of the Syrian government, also used the mosque opening to push his anti-ISIS message.

“We see what’s happening in the Middle East, where terrorists from the so-called Islamic State are discrediting the great world religion of Islam, planting hatred, killing people, destroying world cultural monuments in a barbaric way,” he told the hundreds of invited guests.

“Their ideology is based on a lie, on a distortion of Islam.”